“From what I hear, I'd want to eat at the Gourmand every night... If I were ambulatory.”— Mr. House

The Gourmand is the restaurant in the Ultra-Luxe in 2281.

The Gourmand is the restaurant in the Ultra-Luxe. Upon entering the restaurant the Courier will be greeted by Marjorie. The Gourmand sells more rare and high value foods than almost every other shop in the Mojave. Good quality food can be bought from the Gourmand.

The Gourmand leads off into the Ultra-Luxe kitchen containing more food and cooking facilities. The Gourmand kitchen is one of the primary locations for the quest Beyond the Beef.

The Gourmand appears only in Fallout: New Vegas. 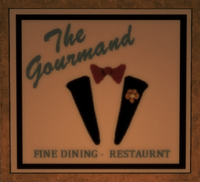 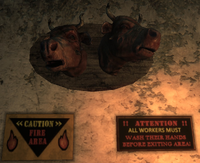 Brahminheads at the entry of the kitchen's roasting area
Add an image to this gallery
Retrieved from "https://fallout.fandom.com/wiki/The_Gourmand?oldid=3335332"
Community content is available under CC-BY-SA unless otherwise noted.