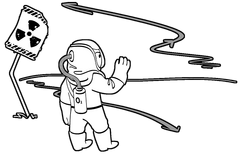 “I know you're from the Institute, so where's Kellogg? Huh? Trying to sneak up on me while you distract me? It's not going to work! I'm not stupid, I knew they'd send him after me!”— Brian Virgil

The Glowing Sea is a main story quest in Fallout 4.

Kellogg's memories and Doctor Amari's advice indicate that the Sole Survivor should locate an escaped Institute scientist, Virgil. His last known position was deep in the most irradiated region of the Commonwealth: The Glowing Sea.

Before embarking on this quest, consider how one will deal with high radiation levels for an extended period of time. A hazmat suit, or power armor are the best options. The hazmat suit bears the advantage of allowing you to move at full speed and sneak more easily, but offers no protection against attacks. Power armor has high ballistic & energy resistance, but you will move more slowly and it may not eliminate all radiation, not to mention the need for fusion cores. If all else fails, procure a normal gas mask (often worn by raiders), and acquire large quantities of Rad-X and RadAway.

Once you've prepared, travel to the Edge of the Glowing Sea and head southwest, following the remains of the freeway until the Pip-Boy indicates a hike off-road is in order. One can expect to face deathclaws, radscorpions, feral ghouls and other irradiated wildlife. When reaching the map marker, the Sole Survivor will find themselves close to the Crater of Atom, a site holy to followers of the Church of the Children of Atom.

Upon entering the location, the strange cult, led by Mother Isolde, will inform the Sole Survivor that they are, in fact, trespassing. Though violence is always an option (search the area for a scrap of paper indicating a nearby cave), it is possible to lower one's weapon and speak to Mother Isolde instead. Answer her questions politely and she will give directions to a rocky cave nearby.

Locate the rocky cave roughly southwest of the Crater of Atom, being wary of the roaming deathclaw in the area. Virgil will be found inside this cave. He requests that the Sole Survivor help him locate a serum within the Institute, in return for his knowledge.

Retrieved from "https://fallout.fandom.com/wiki/The_Glowing_Sea?oldid=3415859"
Community content is available under CC-BY-SA unless otherwise noted.
... more about "The Glowing Sea"
RDF feed
Has platform
PC +