The Gauntlet is a multi-stage death trap built by raiders within the entrance to Nuka-World in 2287.

After Nuka-World was conquered by raiders, the access tunnels were used to construct the majority of "The Gauntlet," an enclosed system of deadly challenges for all newcomers entering Nuka-World via the Nuka-Express, built for the raiders' entertainment.

The Gauntlet consists of a lengthy series of defenses throughout several sections full of traps, turrets, and creatures that victims must fight and survive, and is littered with the corpses of those who died trying.

Those who survive the access tunnels and reach the Cola-cars arena must then fight the raider leader, Overboss Colter, in a rigged fight which is designed to be impossible to win, resulting in certain death for all victims. The raider RedEye will make comments as the Sole Survivor progresses, depending on their choices throughout.

The station section of the Gauntlet consists of small rooms including gift shop and cafe, consisting of turrets and traps. The remains of other raiders, Gunners, and traders lay on the floor. A tripwire trap is located on the left hand side of the room, which will lead to a chain of explosions if not disabled.

The next challenge of the Gauntlet is to safely navigate a skyway rigged with a variety of traps. At the top of the stairs, several traps are located on the ceiling, such as a Tesla trap and grenade bouquet. It is in this room that the dead wastelander Lucky can be found. A tripwire ahead will trigger explosive barrels.

Conversely, on the left side of the room is a Master locked door that can be used to bypass most traps. Once the traps have been disabled or otherwise avoided, there is a set of stairs that must be used to reach the second floor of the skyway. A poorly built wooden floor that can collapse when walked on leads to the next section.

Once on the second floor, navigate around or disarm the three-way tripwire trap, the remains of the dead runaway Ophelia are beyond the trap. Ahead will be a room with three red doors. The door on the right drops grenades upon opening, and the middle door has a Jangles cymbal clanking monkey surrounded by heads on pikes. The left door has a passage which will lead to the next room.

After going down once again onto the first floor of the skyway, there awaits a room full of radioactive barrels. To the left is the corpse of Corin as well as some anti-radiation supplies, and the dirty and scratched keys. Also to the left is a mall alcove with a metal shelf containing the set of rusty keys. These unlock the Expert locked door, exiting the area to the access tunnels.

Upon entering the access tunnels, there is a Novice locked terminal to the left that allows the turrets to be shut down in the next room. These turrets awake only if the clapping monkey trap is triggered and can be avoided if shot from the other end of the room before being alerted. The exit door key is located behind the monkey, near the Nuka-World storage room key.

The next room consists Power Substation D, a generator room transformed into a small maze featuring a variety of traps and a cage with two rad-rat pups, an animatronic alien, and mines. Private Tyler's corpse can be found in a corner of this room.

The next door leads to the tunnels themselves, providing transport to other parts of the park before the war. Now it is filled frag mines and a truck bed full of Galactron Protectrons. Several waymarking signs are found here, indicating stops for each park route. Booby-trapped cars with mines underneath can start large chain explosions in the tunnel.

Further on, the tunnel has collapsed into a large cavern with a fragile plank walkway, followed by an Expert locked door. Falling down below results in several mirelurks rising from their hiding places. The deceased super mutant Crag is found in the mirelurk-infested waters below the bridge. A cave to the left allows access to the next area if one falls into the water. A fusion core can be found just after passing the wooden bridge.

Once this area is passed, the next obstacle is the booby-trapped door to Utility Access 8-N. The path following the door is likewise booby-trapped. When exiting the hallway into this room, the maglock door will close and gas will begin seeping out from the ceiling. The gas will gradually damage the Sole Survivor unless they are wearing a hazmat suit. Sections of the room will also spawn radroaches, including at least one legendary radroach, which upon its demise, will spawn a small swarm of smaller radroaches. Using the terminal to open the security gates will shut off the gas.

The Nuka-World utility substation password for the terminal is on a holotape, on a desk in the room on the right as one enters the area. The key for the door containing the terminal is in a door handle in a caged section, west of the desk with the holotape. The remains of Sergeant Marcks are in this section which once passed, leads to the Nuka-World maintenance shed.

The exit from the access tunnels is labeled Ride Maintenance leads to a stairway into the shed, where a number of ants and swarms are nesting. Make your way through the shed, following the arrows around, up a set of concrete steps. The shed consists of rusted out bumper cars, teacups, construction vehicles, and other materials from the Cola-cars arena are found, as well as cabinets with various items inside.

Once up the steps, Gauntlet participants will be attacked by various Nuka-World raiders from above during their "audience participation" segment. There are also some grenade traps and machine gun turrets along the way. Exiting the shed leads to the Cola-cars arena, a section of the Gauntlet that RedEye describes as "the homestretch."

The path from the maintenance shed begins at a door marked emergency exit, noting that an alarm will sound if opened. The alarm is what prompts RedEye to summon the raiders to come to the arena to watch the impending fight. The main area with Overboss Colter is to the left, where one can see Porter Gage completing preparatory maintenance on his power armor. In the west section of the arena, there's an inaccessible door, which is only open during the main quest Taken for a Ride.

Behind the door is a generator room, inside a fusion core can be found. The room can be accessed by going through a destroyed wall. Taking this fusion core results in the power in the arena being cut back by 30%. Immediately to the right is the locker room where one prepares for the fight, where the remains of Anise can be found. An intercom is on the wall, used to speak with Porter Gage. Inside one of the lockers is the Thirst Zapper. Beyond the locker room, the door leading out to the arena is located.

The Gauntlet appears in the Fallout 4 add-on Nuka-World. 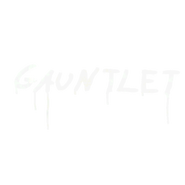