Render Unto Caesar
The House Always Wins
I Hear You Knocking
I Put a Spell on You
The Finger of Suspicion
Wild Card: You and What Army?
Nothin' But a Hound Dog
For Auld Lang Syne
A Trusted Aide
Powder to the People
Saving (or Savaging) Sergeant Teddy
Laurifer Gladiator
Silus Treatment 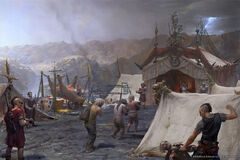 "City of Lost Angels"
“That crazy lightshow over the Fort, what the fuck was that, some kind of thumb of God you called down? Amazing, fucking amazing.

Play sound
FNV LeeOliver ThatCrazyLightshow…
”— Lee Oliver in All or Nothing, or No Gods, No Masters if you upgraded the securitron army

Fortification Hill (named The Fort in the Pip-Boy) is a vast and heavily fortified base of Caesar's Legion on the east bank of the Colorado River. Here, the Legion prepares for its second assault on the NCR at Hoover Dam. This is also the location where the platinum chip is used to install the upgrades to the securitrons, as the Fort is built above Mr. House's secret bunker. Caesar himself is stationed here, along with his Praetorian guards and the bulk of the Legion's Mojave forces in preparation for the upcoming battle.

To reach the Fort, the Courier must use the barge at Cottonwood Cove. However, it cannot be taken until certain events take place in game. The Courier must either be invited when exiting The Tops after completing Ring-a-Ding-Ding!, Vulpes Inculta (or Alerio, if they have already killed Vulpes, who will comment on this) will be waiting outside, or if For the Republic, Part 2 has been completed to the part one must report to Colonel Moore to inform her that the Great Khans have been dealt with. If you have not yet been invited, the guards at the Fort may be hostile. If the Courier travels to Cottonwood Cove with Boone, Boone will immediately attack all legionaries on sight, causing them to turn on the player character (unless a Legion disguise is worn).

On either side of the entrance are sleeping tents. To the north of the entrance past the tents is a small bar. In the center of the camp are the Arena and Caesar's Tent. To the southwest, there are more tents, another bar, and the weather monitoring station, which includes Mr. House's secret bunker. Standing on top of the hill near the entrance will allow a view of other tents and structures off in the distance that cannot be visited.

The Legion Arena is a small pit made of walls of scrap metal put together to form a post-apocalyptic Colosseum. Here the Courier, if male, can fight slaves and captured NCR soldiers to the death for the amusement of Caesar's legionaries. Females will be told they are not allowed to fight in the arena and will not have this option. The only exception is choosing to kill Benny (if he hadn't been dealt with at The Tops) by fighting him in the arena, as a part of the quest Render Unto Caesar.

The Fort appears only in Fallout: New Vegas.

Fortification Hill in the opening scene of Fallout: New Vegas 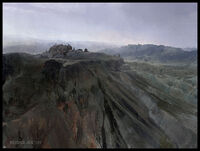 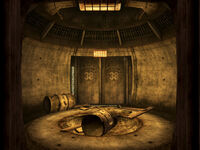 Entrance to the Securitron vault

The broken howitzer at The Fort
Add an image to this gallery
Retrieved from "https://fallout.fandom.com/wiki/The_Fort?oldid=2652685"
Community content is available under CC-BY-SA unless otherwise noted.