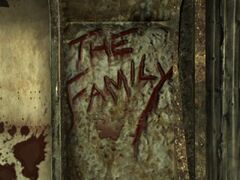 “We are the remnants of society, cast aside like the clean-picked bones of a hunter's feast. I led my flock beneath the sun-baked sands of the Wasteland to keep them safe and teach them my ways. Men of science would call us cannibals, eaters of human flesh. Society labels us as monsters, demons and the unclean.”— Vance

The Family is a gang of self-proclaimed vampires that live in Meresti Metro station, east of the settlement of Arefu.

The Family is a small commune of cannibals, formed by Vance over the years by gathering people like himself: people who all experience a cannibalistic hunger. Vance intends to help these outcasts survive and find some sense of community by banding together and adopting a strictly vampiric lifestyle, as opposed to cannibalism.[1][2][3][4]

Within the Family, they are taught how to keep their hunger under control,[5] and their shame, fears, and inhibitions are eliminated.[6] Furthermore, they justify their lifestyle by emphasizing survival above all else; they only kill what they consume; nothing more, nothing less.[7] However, before they join the Family, each prospective member is asked to seek solitude and meditate on whether or not they should stay with the Family or control their urges by themselves.[8]

The Family is named for their metaphorical relation to each other by blood (or rather, their thirst for it). Vance takes in all that the greater wasteland deems a monster and teaches them to suppress their craving for human flesh by only partaking of blood instead, but more importantly, they are "normal" within the Family, tolerated and understood for what they are.[6]

The humans of the wasteland brand them as "monsters, villains, criminals, animals"[9] and call for their extermination or reform, but reform would imply that something is wrong with the cannibals; Vance obviously does not agree with this notion and sees his teachings of vampirism as an improvement and a way to transcend their otherwise cannibalistic nature.[10][11] He preaches to the Family that they are no different than any other wastelander that has killed in order to put food on their table or protect their territory, and that the Family would be insane to ignore the adaptation they have been provided by evolution.[9] However, despite his zeal, Vance knows that they do not truly possess any extraordinary abilities and the mantel of "vampire" only serves to hold the Family together.[3][12] In fact, their "adaptation" is nothing more than a product of their "will and sincere meditation" that allows them to focus as they drink the life force of another being. The ability can be taught to anyone willing to learn.[13]

They have recently taken to been raiding Arefu, a small village west of their sanctuary, and the mere mention of the Family invokes fear in even the most intrepid of Arefu residents. In their latest raid, they kidnapped Ian West once they discovered he shared the same condition as them. Ian was lucky that Vance found him when he did, as Vance covered for Ian's act by masquerading it as a routine Family attack.[5] Evan King pleads with the Lone Wanderer to deal with them, and gives hints to the Family's home; where a deal can be struck between the Family and Arefu and either the Family will protect Arefu in exchange for donated blood packs, or they leave Arefu alone, for which Arefu either donates or sells blood packs to them.[14]

The Family is a self-reliant commune built around the cult of personality that surrounds Vance, whose rules are law in the underground Sanctuary of Meresti.[15] The Family's Laws are a code of conduct that Vance expects to be followed by all members, and each member is expected to remember and enforce one of these laws.[16][17]

The First Law
"Feast not on the flesh; consume only the blood. This is our strength."

We do not eat the flesh of those we kill for food. We will only drink of their blood and leave the body intact. The consumption of flesh is filthy and unclean. This action is what causes the humans to treat us like animals. We are not animals, we are the Family.

The Second Law
"Bear not the child; welcome only the exile. This is our fate."

Because we carry the stain of our past in our bodies, we can never let it pass to our offspring who would in turn carry out those foul actions beginning the cycle anew. The Family must seek the Wasteland for others of its kind in order to maintain itself. That is our fate.

The Third Law
"Feed not for pleasure; partake only to nourish. This is our dignity."

We only kill the humans when we are hungry or when we must defend ourselves, we never hunt for sport or pleasure. We do not prey on children for they are not yet tainted by society's view of us. The Family will not tolerate murder.

The Fourth Law
"Seek not the sun's light; embrace only the shadows. This is our refuge."

Because we are creatures of the night, we must not set foot in daylight. We move silently across the ground only under the watchful eye of the moon above. At the rising of the sun, we must seek the embrace of the shadows and never again gaze at its brilliance. The Family seeks the dark as its refuge.

The Fifth Law
"Kill not our kindred; slay only the enemy. This is our justice."

Above all, no member of the Family will ever take the life of another member without the consent of the current leader. Anyone disobeying this action, the most heinous of all our crimes, will be exiled from this place forever. We must not let our own inner demons cause us to fight amongst ourselves. We number only in the few, and we cannot risk extinction.

Given that the Family is not welcomed by human society, they are hesitant to allow a human into their sanctuary and will protect themselves against violence if need be.[18] Still, they can be reasoned with and will form a compromise with Arefu if the deal is favorable to them.[14] Attacking anyone within Arefu even before the deal is struck will cause the Family to become hostile.

The Family appears only in Fallout 3.

The password to open Ian's room is "Vespertilio," which is a genus in a family of the bats.

Hacking into the Family's terminals will turn the Family hostile, even though the terminal itself is not marked as owned. This happens only if Vance or any other member of the Family did not give you the password. [verified]