The Enlightened, or the Wise Mothman's Enlightened, are a religious faction in Appalachia. They were originally members of the Cult of the Mothman, but splintered from it.[1][2] They exclusively worship the purple-eyed Wise Mothman.

During an attempt to summon the mothman on October 22, 2077, Wise Charles the Forewarned, back then a cultist going by the name of Brother Charles, received whispers from the Wise Mothman, foretelling about an impending disaster.[2][3] He then led his fellow cultists deep down into the safety of Lucky Hole Mine, where some of them "turned to darker worship."[1][2] Seeing the "Truth" in the Wise Mothman's previous revelation,[4] Charles and some of the cultists continued to listen to his whispers, and left the mine after finding the corruption of their former brethren to be unbearable.[2]

Upon exiting the mine, many were shocked by seeing the post-apocalyptic world. They despaired, and urged Charles to reject the Truth and return to the safety of the mine. However, Charles knew about a far away place, which he considered to be a "beacon of safety," and a "home for those that had heard the Truth and been Enlightened." After a long and dangerous journey, they reached their new home, where they founded their church and named it the Lantern, a shining beacon against "the ignorance of the world."[2]

A group consisting of Wise Charles the Forewarned, Interpreter Clarence, and the Observers Errol, Johanna, and Marlon, arrived in Point Pleasant in 2104. They returned in order to commune with the Wise Mothman at the height of his power during the equinox.[5]

The Enlightened think of themselves as being blessed by the Wise Mothman's Truth, which they deem to be a lesson, a warning, and the path to enlightenment, all at once.[1] They consider themselves to be students of wisdom,[6] and hearing and listening to the Wise Mothman's whispers, as well as transcending the limits of human understanding plays an integral part on every member's path to enlightenment.[1][4] To a certain extent, the group also possesses knowledge of either astronomy or astrology,[5] which they have obtained from listening to the Wise Mothman.[7]

The group is welcoming to people that are ignorant of the Truth, as they consider ignorance to be the first step on the path to enlightenment.[4][8] The path to enlightenment involves several stages of learning, each of which is tied to a rank. The observers, members of the first rank, are aware of their ignorance and are like the larva of a moth. The second rank, the interpreters, are like the pupa of a moth, surrounding themselves in a cocoon of the Wise One's words, and casting form from them. The last rank of wise is reserved for those few, who break free from their cocoon like a moth, and become truly enlightened.[9]

The Enlightened exclusively worship the purple-eyed Wise Mothman, which they consider to be a single and powerful, but mortal entity.[10] Unlike their former cultist brethren, to which they refer to as "The Dim Ones,"[11][12] they completely reject worship of red-eyed mothmen as animalistic harbingers of a godlike deity, referred to as "Holy Mothman" by the cultists.[10][13]

The invocation of the Wise Mothman during the equinox involves the inhalation of several substances, one of them being dust,[14][15] and can result in experiencing the Truth first hand.[16] However, taking part in the ritual may result in suffering from temporary hallucinogenic side effects,[17][18][19] and according to the voices in Observer Marlon's head, inhaling the dust for a prolonged period of time may prove to be harmful.[20]

The Enlightened appear in Fallout 76, introduced in the Night of the Moth update. 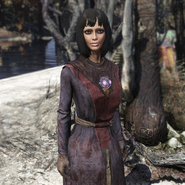