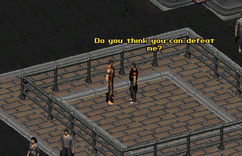 “You have already defeated my men, and you have passed my test. You are ready fight Lo Pan.”— Dragon

The Dragon wants you to take out Lo Pan - hand to hand is a quest in Fallout 2.

Upon first arriving in San Francisco, there will be a ring in the middle of the crossroads, with two men fighting hand-to-hand in it: a muscular man with his torso naked, and a man dressed in black.

The muscled man will throw his adversary to the ground, stating: "Your kung-fu is not good here".

After a fade-in cut, one can freely talk to the citizens, and learn that the two fighting men are masters of martial arts, opposed in philosophy. The Dragon, the bare-chested man, cares for others and wants to teach his martial arts knowledge to all. Lo Pan, the man dressed in black, just cares for himself and does not want to teach others. Both have their respective gyms, one on the right street, and the other on the left street.

Visiting The Dragon yields an explanation of the situation, and the current stalemate, as well as his point of view, one must agree with him to begin the quest. The Dragon cannot fight directly in a deathmatch with Lo Pan, but the player character can offer to do this for him, and if one is sufficiently skilled in Unarmed combat (125%) he will allow the player character to challenge Lo Pan. If the player character is not, he will not permit the confrontation and one can train with him. The training lasts around four hours, and it increases the Unarmed combat skill by 5%. If one tries to train again with him before one full day has passed he will refuse, saying "Not everything is physical strength, grasshopper."

One can challenge The Dragon, but must first challenge six of his followers, one after another, healing automatically after defeating each one.

After defeating his followers one will finally be able to confront Lo Pan. Go to his gym on the west side of the street, and challenge him. Defeat his four followers, and dispatch him quickly. If one is too slow he will break the rules by pulling out a .223 pistol. After defeating him talk to The Dragon to finish the quest.

Alternatively, one can help Lo Pan to defeat the Dragon.

Retrieved from "https://fallout.fandom.com/wiki/The_Dragon_wants_you_to_take_out_Lo_Pan_-_hand_to_hand?oldid=3418837"
Community content is available under CC-BY-SA unless otherwise noted.