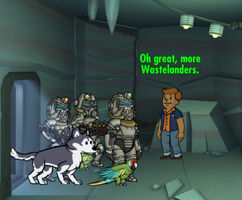 “Across the Wasteland rumours swirls of a treasure called "Door Buster." The race is on the claim this mysterious prize!”

The Door Buster is a limited time overseer quest in Fallout Shelter, available during the Thanksgiving season.

This quest takes place in a five level mine with a random layout. An NPC will greet you near the entrance with dialogue options, though the options are inconsequential. Enemies are entirely raiders in groups of three. Near the bottom of the mine is a raider leader accompanied by three additional raiders who will yield a lunchbox upon defeat. The room they are in contains a rare weapon and a rare outfit. 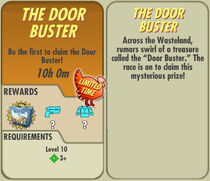 Rewards
Add an image to this gallery

Retrieved from "https://fallout.fandom.com/wiki/The_Door_Buster?oldid=3117748"
Community content is available under CC-BY-SA unless otherwise noted.