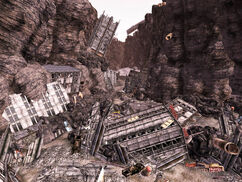 “At the end of the Divide, through the trenches and wreckage - that's where you'll find me. My new home, here, amongst dead men. You and that machine, keep your eyes on the tower that cuts the horizon... you'll find your way. Made it this far... not much farther to go.”— Ulysses

The Divide is a main quest in the Fallout: New Vegas add-on Lonesome Road.

Once the Courier has launched the rocket from the Ashton silo control station, they can travel through the Ashton missile silo. Enter the control station and activate the elevator. Once the elevator has been activated, tunnelers will climb into it and attack the player character. Upon reaching the bottom of the elevator shaft, continue into the missile silo through to the central room. An Auto-Doc and a commissary terminal, guarded by a sentry bot, are on the same level as the bottom of the elevator. Then climb down into the pit at the bottom. Go through the opening, killing or avoiding the small number of tunnelers to get to the Sunstone Tower roof.

Climb up the staircases of the tower to get to its roof, being wary of the tunnelers which inhabit the building. Having reached the roof and conversed with Ulysses, one must then climb down the building using the fallen platforms.

Once the player character gets to the platform, follow the map marker through the array of ruined buildings (some occupied by marked men). One will need to detonate a few warheads to pass, and there are a few optional warheads as well.

Once the Courier reaches the Cave of the Abaddon, everything is dark. Travel through the cave, killing all the tunnelers, or just run straight past them. Enter the door, and one will emerge in the Boxwood Hotel. Climb up the railings and through the two rooms to get to its roof.

Once the player character gets to the roof, they will talk to Ulysses again, and he will override ED-E, causing the Courier to lose him as a companion. Use some railings to climb down from the roof, and travel towards Ulysses' Temple. Use extreme caution when traveling here, as a number of deathclaws patrol the area around the cave Rawr is in. Some marked men will be patrolling a collapsed building near a warhead, which must be detonated to continue.

Travel under the collapsed building. Take care when walking around here, as Blade, a unique marked man hides here using a Stealth Boy, and can easily sneak up on the player character. When the area is safe, travel up the rocks toward the wastewater treatment plant to get to the roof of a collapsed building. Cross the top of the building heading north, away from the wastewater treatment plant, and follow the stairs and walkways west, then cross a bridge to get to the second floor of another collapsed building. Travel through the building to get to a marked men camp, and through the mass of mutilated body parts, one will find Ulysses' Temple. Enter the large door to complete the quest.

Retrieved from "https://fallout.fandom.com/wiki/The_Divide_(quest)?oldid=3474710"
Community content is available under CC-BY-SA unless otherwise noted.