The Devil's Throat is a location in the Mojave Wasteland in 2281. It is situated east of Bloodborne cave.

The Devil's Throat is a giant radioactive crater in the northeastern Mojave Desert. There are pools of contaminated water at the bottom of the crater, and a wrecked truck in the center with scattered toxic waste barrels nearby. A dead super mutant lies at the rear of the truck. The area is inhabited by centaurs, including a giant evolved centaur. They respawn after three in-game days when killed.

The Devil's Throat appears only in Fallout: New Vegas. 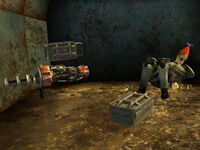 The CZ57 Avenger in the back of the truck, along with a dead prospector