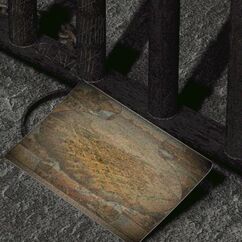 West Side
East Side

Collect money from Fred
Get book from Derek
Lara wants to know what is being guarded in the church
More...

Play sound
Khans of New California.ogg
“The Den is an anarchistic place where a kind of Darwinian struggle is played out. Only the strongest, fastest or smartest will survive here.”— Tubby

The Den is a safe haven for drug and slave trafficking, located in northern New California. The town can be found six squares east and three squares south of Arroyo.

In 2241, the Den was a frontier town by any measure. Located on the fringes of New California, it had no central authority or any law enforcement, leading to a Darwinian struggle where only the strong survived.[1] The town's economy relied heavily on the New Californian drug trade.[2]

After the death of the Master in 2162, the Den witnessed a wave of refugees consisting of super mutants and Children of the Cathedral cultists, who fled to the north. Some of the Children even committed suicide within the town.[3]

By 2281, the raiders and slavers from the Den are mostly gone and have been replaced with actual laws and taxes. This transformed the economy, which focuses more on manufacturing and farming, rather than drugs and slaves.[4]

The East Side is where the Slaver's Guild has its headquarters. There is also an old church, a graveyard, Mom's Diner, and the Hole Bar. The graves in the graveyard, starting with the one in the upper right, can be dug up for some items. Digging up any grave beside Anna's will result in a significant loss of Karma.

There is also a part called the Residential, but it can only be accessed by pressing the 3 key when the picture of the Den is shown (also works from the map itself). It is home for the citizens of the Den. There are four buildings and many squatters around the area. Here, the cut quest to find a way to get the orphans off the streets would take place.

The Den appears only in Fallout 2, and is mentioned in Fallout Shelter.[5]

The town map background is actually an aerial map of Phoenix, AZ from 1885[6]

Retrieved from "https://fallout.fandom.com/wiki/The_Den?oldid=3343902"
Community content is available under CC-BY-SA unless otherwise noted.