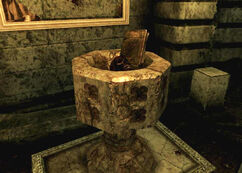 “Swampfolk, who, I should mention, absconded with a book, a precious family heirloom. I wanted to ask you, friend; will you get it back?”— Obadiah Blackhall

The Dark Heart of Blackhall is a side quest in the Fallout 3 add-on Point Lookout. The player character is tasked with finding Obadiah Blackhall's book, the Krivbeknih, which was stolen from him by some swampfolk.

Enter Blackhall Manor, where Obadiah will speak of a book that has been stolen from him and taken to the east, at the ritual site. Upon leaving Obadiah's home, the player character is met by Marcella, a missionary spreading her faith across the wastes. She claims that Obadiah actually wants the book for more than just keepsakes, and plans to use it for a ritual to control the swampfolk, and under no circumstances should it be returned to him. She requests that upon finding the book, it should be given to her instead, at the disaster relief outpost, in the western half of Point Lookout.

However, to make either decision, the Krivbeknih must first be found. Head to the ritual site and look out for the swampfolk guarding the entrance to the area. Look for a small door in the ground amongst the charred remains of a building and head in. Navigate through the chambers to the bottom of the ritual area where a mutilated body with a ritual knife thrust into its head, lying on top of a large table can be seen. Directly behind the table is a pedestal with the book inside. Upon taking the book, swampfolk reinforcements will begin to pour into the area, furious with the attempted theft. It is likely to be ambushed by additional swampfolk upon leaving the basement. Once out and the area is clear, either return the book to Obadiah or bring it to Marcella.

If taking it to Marcella at the disaster relief outpost, the player character will discover that she was killed in her tent and may be ambushed by at least one Smuggler. Obadiah apparently hired smugglers to kill her (if he is questioned about this, in one conversation path, he denies it, and in the other, he apologizes for his "indiscretion"). In addition, "Die thief" is written in blood on the side of the tent, hinting that she was believed to have the book.

There is a holotape in the same tent as Marcella. Upon listening to it, she begs the player character to destroy the Krivbeknih. If wishing to do so, the player character must venture to the Virulent Underchambers in the Dunwich Building, back in the Capital Wasteland. Access the part where there are metallic corridors near the end of the underchambers, and then ignore the exit stairs. Enter the lowest level into the tunnels beneath where Jaime can be found (if not previously killed) worshipping the obelisk. After finding the obelisk in the Dunwich Building, activate it and the book will ignite in flames (and also incinerate the nearby feral ghouls).

If deciding to take the book to Obadiah, he'll reward the player character with 1000 caps. Nothing else changes - he will still go to the basement and pray, whether or not the book has been destroyed.

At some point during development the plot of this quest was dramatically different. Rather than asking the player character to seek the book directly, Obadiah would instead request that a letter be delivered to Marcella. This letter in turn is revealed to be a plea for help from Obadiah, who Marcella describes as "a good man, but his family has an evil past."

Marcella explains to the Lone Wanderer that the Krivbeknih was a Blackhall family heirloom with a dark past, the origin of "the heathen Krvibi ritualists" (presumably a group of swampfolk, though not specified), and one Obadiah had hoped to have gotten rid of for good. Marcella states she has separate knowledge that the book, stolen years ago without the knowledge of the Krvibi, has somehow made its way back to Point Lookout in the hands of the Krvibi, who now hold the book. At this point the Lone Wanderer would be tasked with obtaining the Krivbeknih from the ritual site, the location given by Marcella.

After obtaining the book, Marcella would be found dead. However, dialogue with Obadiah later would indicate that it was Krvibi who had murdered her. Blackhall reacts with shock at both Marcella's death as well as the presence of the book, which he had assumed was long gone after it was stolen years ago. His reaction to the latter is more severe, as he then explains that it his obligation to destroy it as "the last Blackhall." The only way he knows to do so requires a sacrifice, namely Obadiah himself, especially since the Krvibi would almost certainly kill him in order to get the book back.

Although he is committed to sacrificing himself in order to be rid of the "family Bane," if prompted, Obadiah explains that there is one other way he could think of to destroy the book, though it is beyond his abilities.

“There is... another option. I could never make the journey myself, though. North, far to the north. Constance had a brother, Richard Dunwich. He was a wealthy businessman outside of the city to the north, had a company building there. His obsession with the occult was as great as her own, and there's an object of great evil in that building. The book has been drawn to it before. To take the book there would destroy it. You would have to take that journey, though, and you must not fail if you attempt it.”

At this point the player character would be given the option of accepting the task and taking the Krivbeknih to the Obelisk housed in the Dunwich Building in order to destroy it, or telling Obadiah, "I'm sorry, I think you have to do this on your own." Obadiah would agree if the latter choice is selected, and presumably would proceed to execute the ritual and sacrifice himself.

Though the associated scripting and objectives for this version of the quest are no longer present in the DLC, a large portion of the dialogue remains, including voice resources for all of Marcella's dialogue. It can be accessed in the G.E.C.K. under the quest ID DLC04FF02graveyard.

If giving The Krivbeknih to Obadiah Blackhall, the player character's reward is 1000 caps and 100 XP for completing the quest.

Alternatively, destroying the book with the Obelisk in the Dunwich Building will net positive Karma (500 points) and the same 100 XP.

Alternatively, the book can be given to Obadiah for the reward. He then can be killed for no Karma loss. The book can now be taken to the Dunwich building and destroyed or kept as a souvenir. It’s one of the few unique items in the game that’s actually unique in appearance as well as name.

Retrieved from "https://fallout.fandom.com/wiki/The_Dark_Heart_of_Blackhall?oldid=3378380"
Community content is available under CC-BY-SA unless otherwise noted.