Old World Blues
“Ahahaha! I am on-line once again! Tremble, world, before my electric heating coil of doom!”— The Toaster

The Cuckoo's Nest is a location in the southwest of Big MT in 2281. It is located east of X-7a "Left Field" artillery launch.

The Cuckoo's Nest is a circular cave with a large outcropping in the center. The cave appears to be a lobotomite den and is littered with corpses, junk, piles of flesh, makeshift shelters, beds, and what appears to be a shrine to the Toaster. There are several hostile lobotomites within the cave, including the unique lobotomite Test Subject 1.

Below the slope that leads to the cave opening are five graves which can be opened with a shovel. Just below them to the right at the bottom of the slope, there is a shiny locker with an Old World flag on its right side in blue, painted by Ulysses.

This area is a reference to the 1962 novel One Flew Over the Cuckoo's Nest, where the main character had electroshock "therapy" conducted on him to render him docile and was lobotomized near the end of the story.

The location is prone to slow-down. The area around it may lag significantly, making the cave nearly impossible to get to, and made even more unpleasant by the horde of lobotomites wandering around outside. [verified] 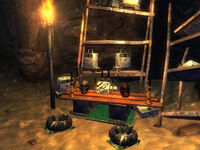