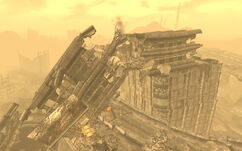 The Crow's Nest appears to be a sniping post, most likely used by NCR riot control to keep coverage of the High Road. It may have been an office building at one point. It has since then collapsed on the far side, and the remaining ghoulified snipers camped there have died.

There are two collapsed buildings leaning over the highway, accessed by the detonation of a warhead. Along the left side are arrows pointing upwards toward some wreckage, which must be climbed to reach the Crow's Nest. There are multiple active satchel charges on the two bridges connecting the building that must be climbed. Take caution, as the satchel charges can blow the player character off the platform.

Once on the platform, a RALPHIE for the Feel Like a Kid Again challenge can be found on the back wall of the nest. There is an armed satchel charge, which is difficult to disarm, near the center of the platform, hidden behind the lip of the concrete.

Ulysses can be seen watching the player character when approaching for the first time.

The Crow's Nest appears only in the Fallout: New Vegas add-on Lonesome Road.

Tæles of Chivalrie and Milsurp Review
Add a photo to this gallery
Retrieved from "https://fallout.fandom.com/wiki/The_Crow%27s_Nest?oldid=3430467"
Community content is available under CC-BY-SA unless otherwise noted.