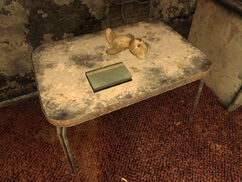 The items to be found

“Some people have gone missing from the camp lately. Haven't seen any signs of violence or heard about any feuds, they just... up and left.”— Captain Parker

The Coyotes is a side quest in Fallout: New Vegas.

"Coyotes" is a nickname for human traffickers who smuggle people across national borders, particularly the border between the United States and Mexico.

Retrieved from "https://fallout.fandom.com/wiki/The_Coyotes?oldid=3273485"
Community content is available under CC-BY-SA unless otherwise noted.
... more about "The Coyotes"
RDF feed
Has platform
PC +, Playstation 3 +  and Xbox 360 +