Dared to venture to the Courier's Mile

Play sound
Metallic_Monks.ogg
“The Courier: What's the Courier's Mile? Is that where the Ashton missile hit?
Ulysses: My name for it. If you have a better one, you grant it - my choice in names won't carry past you and I.

The Courier's Mile is a location in the Divide in 2281. The location is ground zero for the nuclear missile launched by the Courier during The Launch. The entrance to the area is in the southwest corner of the Hopeville region.

The area is distinguished by a wide crater befit with ruined cityscape. The radiation has irradiated the local marked men, as well as some deathclaws that roam the ruins. A RALPHIE poster required for the Feel Like a Kid Again challenge can be found by taking a right towards the area with irradiated deathclaws. It is above a desk in a ruined building.

The Courier's Mile appears only in the Fallout: New Vegas add-on Lonesome Road. 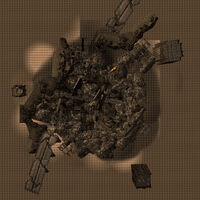 Entrance of the Courier's Mile from the inside

General view of the Courier's Mile