Fallout 3
“We arrived here in '55. Established ourselves in the Citadel within the first few months. The Elder has kept us busy since then.”— Scribe Rothchild

The Citadel, sometimes referred to as the DC Bunker,[1] is the heavily defended headquarters of the Brotherhood of Steel in the Capital Wasteland in 2277. It is built into and beneath the ruins of the Pentagon, located at the 1600 Defense Pentagon, Washington, D.C., on the west end of the Key Bridge, northeast of Arlington Library.

The building was constructed at the site formerly occupied by the notoriously unsafe Hoover-Washington Airfield. Although the original pentagonal shape was dictated by the planned Arlington Farms location, it was retained at President Roosevelt's request. The massive, four story high concrete building has five concentric rings, designated from the center out as "A" through "E" (with "F" and "G" in the basement). It also has five facades, counting clockwise from the north one: the Mall Terrace Entrance, the River Terrace Entrance facade, the Concourse Entrance (or Metro Station) facade, the South Parking Entrance facade, and the Heliport facade. The Mall Entrance and The River Entrance feature a portico, with the latter leading out to a long terrace once used for ceremonies.

In the years leading up to the Great War, the Pentagon was adapted as a location for one of the most secret military research projects, a joint venture between General Atomics and RobCo aiming to create Liberty Prime, the ultimate American war machine. However, the nuclear war and the destruction of America cut the project short and the damaged building was eventually abandoned.

It was not until 2255 that it earned a second lease on life, when the elder council of the Brotherhood of Steel decided to send a contingent of soldiers to the East Coast, to recover any and all advanced technology from Washington, D.C. When the contingent under Star Paladin Owyn Lyons reached the Pentagon, they discovered it largely destroyed. However, upon closer inspection, they discovered its sub-levels mostly intact, with enough pre-War technology and weaponry to keep Brotherhood forces going. They also secured the mighty Liberty Prime, a technological marvel that, if finished, could help the Brotherhood rebuild strength and reputation that had been declining steadily for years.

The discovery earned Lyons a battlefield promotion to elder, and a new directive from his superiors: to establish a new, permanent Brotherhood base in the Capital Wasteland and continue the search for any other advanced technology hidden in the capital's ruins. The Citadel's construction was masterminded by Scribe Bowditch. The new gate, leading directly into the Bailey, was built into the destroyed corner between the Mall Entrance and River Entrance façades, with a crane-operated solid metal gate barring entrance.[2]

After a few months of work, the husk that was Pentagon finally became the Citadel. The Brotherhood reoccupied the laboratory underneath the courtyard and the two inner rings, A and B. The remaining three are left empty, except as transit between the inhabited sections and the sentry posts mounted on the top rim of the E ring. The courtyard was adapted as training grounds, called the Bailey. Over the next decades, the former heart of the American military would bear witness to a number of events significant to the Capital Wasteland. By 2287, a full decade after the events of the Brotherhood-Enclave War, the Citadel continues to serve as the headquarters of the eastern chapter of the Brotherhood.[3] At some point, the Citadel was the site of a noteworthy occurrence, prompting some members to state "Remember the Citadel!"[4]

The Citadel is a large fortress with walls of stone and steel. It retains the shape which gave it its name, the "Pentagon." It only has a single entrance, a large metal gate usually guarded by multiple paladins, and one sentry bot. (After the water purifier is completed and operational, these guards no longer appear.) A small corridor leads from the main gate to a door which provides access to the inner bailey.

The inside is inaccessible until the quest The Waters of Life is completed. Entry is scripted as part of the completion of this quest. Before then, the gate guard Paladin Bael will gruffly deny entry.

The fairly large bailey serves as a training and sparring area. Under the command of Paladin Gunny, new recruits practice various skills from unarmed combat to firearm usage. To this end, the bailey contains shooting ranges and other installations for combat practice. A large hatch in the middle of the courtyard connects to the laboratory, although it cannot be used as an entrance by the player character. The laboratory and A ring, sections of the buildings which surround the yard, can be accessed through doors opposite and next to the main entrance. There are several beds here for the player character and initiates to use.

The A Ring is a small sector within the Citadel, which can be accessed directly from the bailey. The entrance is on the right upon entering the Citadel.

The A Ring contains the Lyons' Den, the Great Hall, the Library, and entrances to B Ring as well as the Citadel laboratory. The Lyons' Den is the quarters of Lyons' Pride while the Great Hall serves as a briefing room for high-ranking members and the Pride. This is where the Pride gathers and waits for new action orders.

In the library, the Lone Wanderer can find the Vault-Tec terminal they need to consult as part of Picking Up the Trail. Another terminal reveals some background information on the Maxson family and various pieces of information about the history of the Brotherhood. Another terminal contains information on a UFO that crashed shortly before the war and a plan to send mutant rodents to weaken China.

The B Ring is another section within the Citadel which can only be reached from the A Ring via two doors in the back. It consists mostly of sleeping quarters for all Brotherhood of Steel members as well as a medical bay and the private quarters of Owyn Lyons and Arthur Maxson. Lyons' unique laser pistol is in his safe in his private quarters.

Squire Maxson's room contains a hackable terminal in which, among various children's stories and other personal entries, one can find a reference to a Guns and Bullets magazine under the bed in the Lyons' Den (A Ring).

The medical bay is home to Sawbones, a unique Mister Gutsy robot who is the doctor of the Citadel, which Knight Artemis finds "creepy."

The laboratory is the third sector of the Citadel, connected to both the bailey and the A Ring. It spans two levels and consists of the main working area, the armory, and sleeping quarters for the scribes. Various terminals with technical background information on weaponry are scattered all over the place.

The lab is naturally the working place for most of the scribes, save those of the Order of the Quill. While they are conducting research on various fields such as threat assessment, weaponry, and defensive technologies, their main focus is the work on Liberty Prime, a gargantuan pre-War robot which was the main reason the Citadel base was established.

Scribe Rothchild, who is part of various main quests, is usually to be found in the area just in front of the robot, on the bottom level. In the vicinity of the robot dock, there's also a terminal with progress information on the work on Liberty Prime which allows one to run a soundcheck.

On the wall at the bottom level, there is a digital map display from which the Lone Wanderer can extrapolate the location of the Vault-Tec vaults in the Capital Wasteland if they have not already found them. After Scribe Rothchild has used it to show the location of Vault 87, the map markers will automatically be added to the Lone Wanderer's Pip-Boy 3000.

The armory is located in an extra room on the bottom level and is run by Knight Captain Durga. She will trade with the Lone Wanderer if they have Elder Lyons' permission, which is easily obtained.

Inside the laboratory on the same floor entered from, there is a room to the east. The possible companion Star Paladin Cross is located in that room, along with a set of power armor in poor condition.

If the Lone Wanderer chooses to destroy the Citadel in Who Dares Wins, they will find a door leading to the armory within the crater and one on the far side of the circular path around the crater. This section is not to be confused with the regular armory located in the laboratory.

Within this armory, there is a terminal describing several "incident reports" and a wall safe (unlockable through the terminal) containing Callahan's Magnum.

¹After the quest Death From Above

The Citadel appears only in Fallout 3 and is mentioned in Fallout 4 and in Fallout 76, introduced in the Wastelanders update.[5]

However, the above glitch will have to be utilized again to complete The American Dream, as the Citadel's entrance will still be sealed shut, though it will open for Lyons' Pride during Take it Back!. This may also lead to complications with The Waters of Life and Trouble on the Homefront depending on when the glitch is executed. 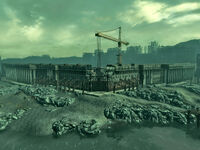 A paladin patrols the outside of the Citadel

The Great Hall inside A Ring

Brotherhood quarters in B Ring

Elder Lyons' room inside B Ring

Liberty Prime inside the laboratory

The destroyed armory, with lots of weapons and ammunition 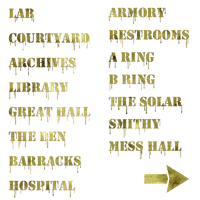 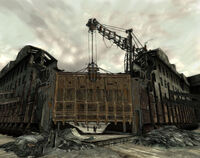 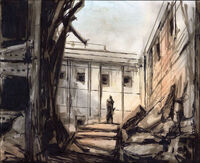 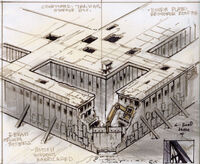 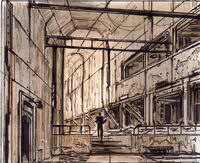