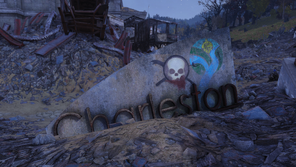 The Christmas Flood, also referred to as the Charleston Flood[2] and the Drowning,[3] was a devastating raider attack on the Responder city of Charleston on Christmas Day, 2082.

At approximately 10:30 PM on December 24, Rosalynn Jeffries, second in command of the Cutthroats, led a group of raiders in an attempted attack on the southeastern city limits of Charleston.[4] A quick and decisive conflict with the Responders left seven Responders dead and 24 injured, with some in critical condition. The raider group fled, leaving behind eight deceased members and Jeffries as the only living suspect, although in serious condition. Having already suffered heavy losses, the Responders chose not to pursue the fleeing attackers.[5]

Interrogation of Jeffries by Melody Larkin revealed her personal connection to the Cutthroats leader David Thorpe. After realizing the Responders could use Jeffries to lure Thorpe out of hiding, Larkin left Rosalynn locked in a holding cell and decided to worry about sending a message to the Top of the World the next day.[6]

Confident in confronting the raiders and hoping to be left alone if they released prisoners, the Responders sent a group to the resort to negotiate a deal. When Thorpe learned of the failed raid, he assumed that Rosalynn was dead. Using mini nukes stolen from the Brotherhood of Steel, he rigged them to destroy the Summersville Dam on Christmas morning.[7][8][9] The Summersville Lake rapidly emptied into Charleston, causing catastrophic, widespread damage across the city. The residents lost almost everything. Buildings were lifted from their foundations, supplies were destroyed, and many citizens perished.[8][1]

Although only a handful of Responders survived, the members kept the idea of the group alive and resettled at the Morgantown Airport, promising to never forget the Cutthroats' actions.[8] While some raiders glorified the destruction of the dam,[10] others felt uneasy about the magnitude of the attack and the innumerable deaths caused.[11] Carol Sweeney, along with a group of other raiders, outright defected from the Cutthroats and settled near Big Bend Tunnel.[12]

The city of Charleston fell into ruin, with its streets now buried in mud and debris, streams flowing through the rubble. Dislodged and destroyed buildings are commonplace, with some even embedded into the ground. While remaining largely intact, the Charleston Capitol Building's central plaza and front entrance became blocked with debris. The Fire Breathers later used the city ruins' difficult terrain as a training ground for new recruits as part of the Fire Breathers physical exam.[13][14][15] Following the event, Shannon Rivers of the Order of Mysteries declared that raiders of the Savage Divide were a major threat and began launching offenses to stifle raider activity for the next four years.[9]

The Christmas Flood is mentioned in and its aftermath appears only in Fallout 76.

An alternate and contradictory version of the Christmas Flood event originally planned by designer Ferret Baudoin would have had David Thorpe order former Taggerdy's Thunder recruit and deserter E. Fisher, a demolitions specialist, to rig a device of several mini nukes stolen from the Brotherhood of Steel.[16] Though he stated he was "pretty sure it's in the lore," this version of events never made it into the storyline. As Ferret would state later in the same interview, "the primal source of lore is what you see in the games," and anything not contained within the game is "just headcanon for a writer."

Retrieved from "https://fallout.fandom.com/wiki/The_Christmas_Flood?oldid=3453922"
Community content is available under CC-BY-SA unless otherwise noted.