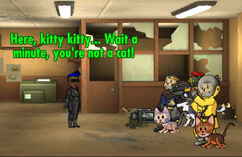 “A cat burglar has been hitting Vault after Vault, taking pets away from their owners. Stop them before they steal another cat!”

The Cat Burglar is a single-stage overseer quest in Fallout Shelter.

A wastelander has been stealing cats from local vaults; the player's dwellers can be sent out to put an end to their crime spree.

The dwellers will track the thief down and find they must fight through several mole rats to reach them. It turns out their eyesight is rather poor and they often mistake mole rats for cats. On top of this their hearing is also patchy, which will initially work in the dwellers favour as they will recieve a gift through the confusion upon meeting the thief. It is quickly realized the that the dwellers aren't there to give her more cats and only one dialogue option, involving threatening a kitten, will prevent a fight.

It is implied through dialogue the "theif" may actually be a victim of someone taking advantage of her poor sight and hearing.

"What if you lost a leg after taking an arrow to the knee?" is a reference to phrase "I used to be an adventurer like you. Then I took an arrow in the knee..." said by the guards in the Bethesda game Skyrim. 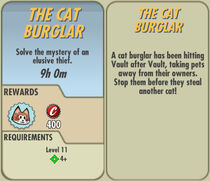 Rewards
Add an image to this gallery
Retrieved from "https://fallout.fandom.com/wiki/The_Cat_Burglar?oldid=3282072"
Community content is available under CC-BY-SA unless otherwise noted.