The Capitol Building is a location situated within Washington, D.C. in the Capital Wasteland in 2277.

Before the Great War, the United States Capitol Building housed the legislative branch of the government of the United States. It is located in Washington, D.C., on top of Capitol Hill at the east end of The Mall. The other side of the Capitol opens onto Seward Square. When discovered by the Lone Wanderer, it is a battle site between super mutants, Talon Company and later, the Enclave.

Upon entering from the west, the other door into the Capitol Building east entrance is immediately ahead and to the right. The entrance to the third area, the Hall of Columns, is in almost exactly the same direction, east-southeast, but about six times further away, past the super mutant behemoth in the rotunda. At the end of the Hall of Columns are two stairwells; the door at the bottom of the second accesses the fourth area, the conference room.

A door in the northwest corner of the conference room area leads back to a room one floor above the southeast corner of the west entrance area, but it is effectively a one-way passageway, as when the player character enters, the floor of the upstairs room caves in and crashes down to the room beneath.

Inside the Capitol rotunda, the Lone Wanderer will initiate a battle between the Talon Company and the super mutants (these battles may differ by level). In the center of the rotunda is a super mutant behemoth. Several other mutants of various sizes are also present. Two super mutant overlords are present with Broken Steel.

The entry-point to the rotunda is on the west, just before the doorway is a passage north, which will lead to an Average locked computer controlling the three Mark VIII defense turrets inside the rotunda. It is set to not attack the Talon mercenaries, but the targeting data can be cleared. These rather formidable turrets can clear the area of hostiles including the behemoth without help from the player character.

The Capitol Building appears in Fallout 3. It also appears on a book cover in Fallout 3 and Fallout: New Vegas and in the Atomic Command game in Fallout 4. It is mentioned in Fallout 76,[1] and is printed on the front of the Treasury Notes introduced in its update Wastelanders.

On May 8, 2007, Bethesda Softworks released a piece of Fallout 3 concept art by Craig Mullins depicting the Capitol after the Great War. This picture appeared then in an apparent terrorist threat, said to be shown in an Islamist forum as a real life would-be scenario, according to media.[2] 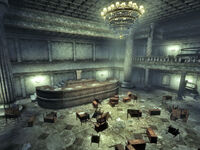 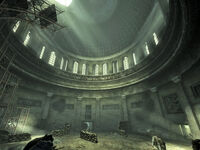 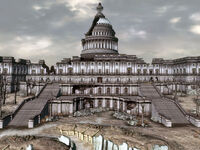 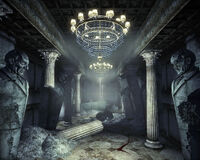 Lying, Congressional Style outside in a Pulowski Preservation shelter

The Capitol Building silhouette in the GNR poster 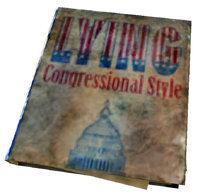 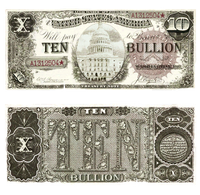 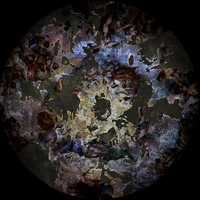