Obtain flint to have Mynoc sharpen your spear

The Canyon is a location in Arroyo. It divides Arroyo from the rest of the wastes, only linked by a rope bridge over a small canyon.

This section of Arroyo is not so densely populated, as only a few vigilant tribe members keep watch over the sole passageway into the village.

The bridge connecting Arroyo to the wasteland serves as a metaphorical gateway for the Chosen One.[1] It is here that the player character leaves their tribe bearing the quest to find the Garden of Eden Creation Kit and prove to be their salvation. The Arroyo which the rope bridge extends across bears ancestral drawings likely created by past, or possibly present, tribe members upon the establishment of the village.

Mynoc, the young warrior standing immediately next to the bridge, will offer to sharpen the Chosen One's spear before their departure, requiring a piece of flint for the job.

The Canyon appears only in Fallout 2. 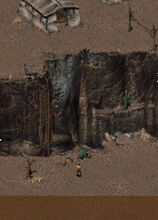 Upon returning to Arroyo after having found the GECK, the bridge overpass is now broken. Hakunin lies at the feet of it. 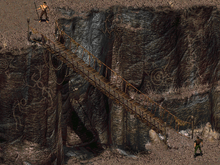