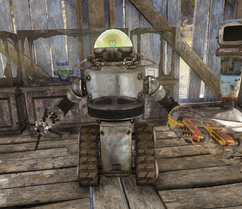 “Hello and welcome to the Company Store where your Mr. Fuzzy tokens buy fleshling treasures!”

The Boss is a robobrain that runs Camden Park in 2102.

The Boss doles out wages for employees at Camden Park, and has been waiting for one to show up ever since the Great War. The Boss refers to humans as "fleshlings," a descriptive term rather than a rude one,[1] and is programmed to be friendly to visitors. However, the Boss becomes stern and scolding when surrounded by workers of the park due to their ill preparation,[2] lack of uniform,[3] or presence in uniform in a non-uniformed area.[4]

The Boss appears only in Fallout 76.

Retrieved from "https://fallout.fandom.com/wiki/The_Boss?oldid=3172310"
Community content is available under CC-BY-SA unless otherwise noted.