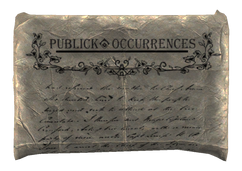 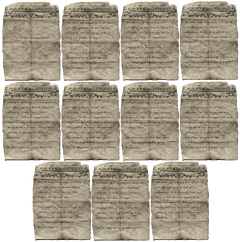 The Boogeyman banished? is a paper note in Fallout 4. It is one of several articles published by Publick Occurrences.

If one ends the main quest by siding with the Railroad, the Commonwealth Minutemen or the Brotherhood and talks to Piper afterward, she will express relief that the Institute is gone, and write this article.

We've all succumbed to it, at one point or another. No matter how brave, or how strong we actually are, the people of the Commonwealth have known fear.

Ever since the "Broken Mask" incident of 2229, right here in Diamond City, when the first human-looking synth infiltrated and attacked a group of innocent settlers, we have lain awake in bed at night, terrified of the Institute and everything it represents.

Long have we dreaded the possibilities: Will someone I know be taken, snatched in the night for who knows what reason? Will one of my loved ones suddenly turn on me, because they are, in fact, a synth replacement? Or will the boogeyman finally step out of the closet and devour all who stand in its way?

We, the people of the Commonwealth, remember the past. We lived in terror in the present. But with the catastrophic explosion at the C.I.T. ruins quite obviously signaling the destruction of the Institute (which this reporter learned was actually located deep underground), the question on everyone's minds now is: has the boogeyman really been banished?

It would certainly seem that way.

As long as there's been an Institute, there have been those opposed to the shadowy, sinister organization. While most ordinary folk wouldn't dream of defying their merciless masters, the Railroad has waged a secret war against them for over thirty years. And the Brotherhood of Steel's arrival in the Commonwealth signaled the most overt opposition the Institute has ever faced. All empires must eventually fall. That said, perhaps it was never a matter of "if" but rather "when."

So what exactly does this mean for the Commonwealth, going forward?

That, dear readers, is the question. For the boogeyman may indeed have been banished, but isn't it possible other monsters may step out of the closet to terrorize us in the night? There are other players in the Commonwealth. None had been as strong as the Institute - but that's sure to change. Will they work with the Commonwealth, or against it? Are they for the people, or against us?

This reporter hold onto hope, for one very specific reason. If my sources are correct - and I know they are - the Institute's destruction was actually orchestrated by someone many of us have already met - the Vault Dweller. It would seem that lonely figure who came into our settlement searching for a missing child actually found the monster that had taken so many children. And killed it.

So be wary as we go into a new tomorrow, my friends. But stay strong. And always, always remember that humanity lives and dies on the surface. Humanity IS the Commonwealth. And maybe, just maybe, with the Institute finally gone, we can have the future we all deserve.

Retrieved from "https://fallout.fandom.com/wiki/The_Boogeyman_banished%3F?oldid=3398811"
Community content is available under CC-BY-SA unless otherwise noted.