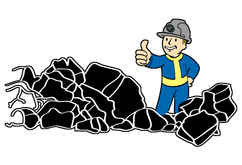 The Big Dig is a side quest in Fallout 4.

The Sole Survivor receives the quest after speaking to Bobbi No-Nose in a backstreet in Goodneighbor. She says that she's planning a job that requires discretion, not sharing many details at first. From here, one needs to go down into the Dig, a tunnel starting at Bobbi's house basement, and help the diggers fight the mirelurks. After, she asks the player character to meet her in Diamond City, where she reveals her plan to break into the Diamond City strongroom under the mayor's office. In order to do this, Bobbi requires assistance in freeing an old associate, Mel, from the security office.

There are several ways to free Mel: pickpocket a key, steal a key from the nearby office, hack the nearby protectron to kill the guards, bribe the guard nearest him or convince the guard to let Mel go by passing a medium or hard persuasion check. The guard that can be bribed or persuaded is the one that moves around between Mel and the office nearest to the jail.

Crimes will of course result in security turning hostile (and possibly one's active companion), however, using dialogue will not turn them hostile (even if the threaten check fails). To the left of the cell is the office, inside the Survivor can steal the key from the desk, then sneak to the right side of the cell. When the guards are not looking unlock the cell with the key and meet Mel outside. Tell Mel about the job and meet him at the Dig.

Once gathered at the dig site, Mel has prepared an eyebot named Sonya to blow through soft walls in the tunnel with sonic resonance. The group begins traveling through old metro stations and basements filled with feral ghouls and more mirelurks. At the first available opportunity to tell Sonya where to blast, it is possible to blow open the wrong path, leading to a dead end with a mirelurk king and a leveled set of power armor.

Mel will frequently express his doubts about the tunnel actually leading to Diamond City, that the team is heading too far south. After they make it to a cavity underneath the strongroom and blow the ceiling, sacrificing Sonya, it is revealed that it's not Diamond City's strongroom but a secluded storage room at NH&M Freight Depot owned by Hancock, Goodneighbor's mayor.

The room is filled with the mayor's henchmen. The player character is subsequently given the choice to persuade Bobbi to leave and surrender, kill all the guards and stay with Bobbi, or betray Bobbi and kill her for the mayor instead. Note, if the player character enters the room wearing headwear incorporating a targeting HUD, Fahrenheit and her men will be automatically hostile, forcing the player to kill them to continue. If the headwear is still worn after finishing the quest by getting paid, Bobbi will also immediately turn hostile and attack.

If the player character persuades Bobbi to leave or betrays her, Fahrenheit will reward them with a legendary minigun with incendiary bullets, Ashmaker. Additionally, Hancock will become available as a follower.

Even if the player character kills Fahrenheit and sides with Bobbi, Ashmaker can be looted from Fahrenheit's corpse and Hancock will still be available as a follower after finishing Hancock's follow up quest of killing Bobbi.

Retrieved from "https://fallout.fandom.com/wiki/The_Big_Dig?oldid=3356327"
Community content is available under CC-BY-SA unless otherwise noted.