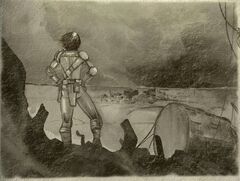 The Belt is a region in the former midwest United States.

One of the Brotherhood of Steel airships was lost in this region after being crushed by a great storm while crossing the great mountains. Survivors were captured by super mutants whose camp was just south of the crash site. After challenging the mutant leader Gammorin, Paladin Latham became the new leader of the super mutants. He then forged them into a powerful army, seizing control over the region.

In 2197 the Brotherhood moved into the region seeking the legendary Vault 0. Their confrontation with Gammorin's Army ended in Brotherhood's unconditional victory. The remaining super mutants were scattered and either exterminated or recruited to the Brotherhood ranks.

The Belt appears only in Fallout Tactics.