The Basincreek Building is a location in the Mojave Wasteland in 2281. It is located south of the west pump station, and west of the Allied Technologies offices.

Prior to the Great War, this now derelict and rickety old office block once owned by an unknown company had been plagued by multiple misfortunes during the final years of the United States.

Long ago, a car had lost control and crashed into the building. The property's sanitary facilities had experienced numerous incidents of flooding. At one point, the wall of the men's bathroom had been broken into. The building once had a deadly ant infestation and was subject to the presence of a bad odor emitting from the corpse of a rat that died within the walls of one of the offices.

A man who worked at the office building had locked himself in his office, unable to find the key. He left a note under his office door, pleading for anyone who found it to call the police.[1]

The building is inhabited by giant soldier ants as well as some giant worker ants and radroaches. There are two bathrooms on the first floor, though only one of them can be entered. The other one has a broken door that is jammed shut, making it impassable. Behind the door, a broken pipe can be seen gushing water.

The second floor in the lobby can be reached, but it requires a lot of effort. The player character needs to take a run and jump from the top of the ruined floor just behind the receptionist's desk. It has a door that can be opened and leads to a void.

The Basincreek Building appears only in Fallout: New Vegas.

The Basincreek Building is an inside joke referencing Obsidian Entertainment's former office building. The Basincreek Building contains several things which at one point happened at Obsidian's old office building, such as a car crashing into the building, the bathroom flooding several times, having an ant infestation, a rat dying behind a wall causing the entire building to smell, and someone punching a hole in the men's bathroom.[2] 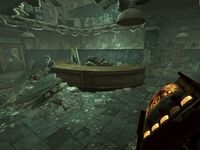