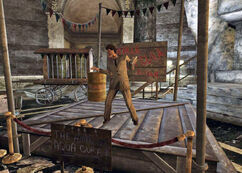 “Well, hello there Smoothskin! Step right up. Have you come to savor the great taste of the Amazing Aqua Cura?”— Griffon

The Amazing Aqua Cura! is a Fallout 3 side quest that is added to the game in the Broken Steel add-on.

Griffon, a ghoul outside of Underworld, is selling Aqua Cura, a tonic that he claims will cure the ghoul condition; however, you learn the truth behind the re-branding soon enough.

There are four ways to begin this quest. The first option is to talk to Griffon in the Museum of History and ask for a bottle of Aqua Cura. According to your Pip-Boy, though, the water is irradiated. If you bring this fact up to Griffon, he will deny this by claiming "your Pipsqueak 2000 or whatever it's called is broken" and the quest will be added. It can also be added by either passing a speech check with Scribe Bigsley or by hacking his terminal. (A fourth option is to stumble upon the operation itself, where you'll find a holotape that adds the quest - see below for location.)

To find proof, you need to find Griffon's bottling operation. Naturally, the ghoul salesman himself does not want to tell you where it is. However, as he mentioned that Scribe Bigsley's men deliver the Aqua Pura to him, Bigsley likely knows where it is. When asked, the scribe will freely tell you that Griffon's operation is in the Museum Authority Building. When you first enter the building, there is a bathroom on the right. There is a bottle of Nuka-Cola Quantum in the tank of the toilet in the closed stall. Follow the hallway on the left of where you entered the building, heading to the northwest corner of the ground floor and go down the stairs. When you go downstairs take a right into a big room with barrels and tubs. In between 2 tubs on a coffee table are 2 dirty water, a Nuka-Cola, a clipboard, a cabinet full of wigs and a holotape.

An identical holotape of Griffon's bottling instructions can also be found on one of the ghoul guards in the basement. In the same room, you can find 4 crates of Aqua Pura, just to the left of where you found the holotape. The holotape tells you that Griffon's ghoul guards dump the Aqua Pura into the tubs and sinks, selling that to raiders and slavers while he sells dirty water in Aqua Cura bottles to ghouls.

When you go confront Griffon you have three options: blackmail him, force him to tell the truth or force him to sell real Aqua Pura from that point on. None of the choices affect your Karma.

You can blackmail him for 300 caps single payment or 40 caps every (in game) week. Alternatively you can pass the first speech check for 100 caps every week, the second speech check for 80 or the third for 60. It is not needed to visit Griffon every week to receive payment, as he will still pay for missed weeks (e.g. if waiting for one in-game month, Griffon will pay 4x the one-week payment), but no more than four weekly payments.

If you force Griffon to confess about the true nature of Aqua Cura, the crowd will turn hostile against him and draw weapons. Griffon will attempt to defend himself, but is no match for his four angry customers, after which you can loot anywhere from 400 - 600 caps off him.

Although Griffon will tell you to come back in a few days, his dialogue will remain the same, simply informing you his business with you is concluded, then try to pass you off as a happy customer to the crowd.
If you had added the Modified FEV to Project Purity, then the Chop Shop will be full of ghouls suffering from its effects. This solution results in negative Karma.

Retrieved from "https://fallout.fandom.com/wiki/The_Amazing_Aqua_Cura!?oldid=3428851"
Community content is available under CC-BY-SA unless otherwise noted.