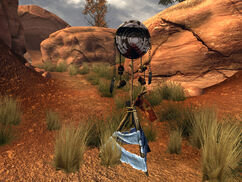 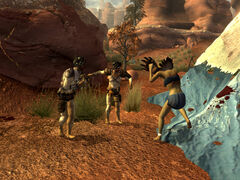 “If their war totems were to 'disappear', they would likely lose the will to fight.”— Waking Cloud

The Advance Scouts is a main quest in the Fallout: New Vegas add-on, Honest Hearts.

To complete this quest, the Courier must either kill all of the White Legs at Bighorn Bluff, or steal their war totems at Bighorn Bluff. The White Legs are split into two separate camps that are rather close to each other. Each camp has roughly three White Legs, and one war totem is located near the front of the camp. As the totems are relatively separate from the living area tents, choosing the non-violent option should allow an easy time sneaking in to take them, so long as the player takes the White Legs' movement patterns into account.

Once all of the target White Legs are killed, or both of the totems are obtained, the quest is completed, though if the White Legs discover you while stealing their totems, the quest will complete, but they will continue to attack. The method of quest completion chosen has no impact on the add-on ending.

If you try to take out the White Legs from cover and do not score an instant kill, the specific tribal you injured will immediately become hostile and run to your location, while those not injured will continue to wander the camp passively. [verified]

Retrieved from "https://fallout.fandom.com/wiki/The_Advance_Scouts?oldid=3442735"
Community content is available under CC-BY-SA unless otherwise noted.