“Vault 404 was destroyed in a Raider attack... but Vault 120 might have more information.”

The (Thinly Veiled) Plot Thickens is an overseer quest and part of Zines from the Commonwealth multi-stage questline in Fallout Shelter.

This quest takes place in Vault 120, which is comprised of four floors. Enemies include radroaches, glowing radroaches, raiders and their leaders. The objective is to find the Vault's overseer on the third floor, who directs the party towards the RobCo plant, their next target in the following quest. After the conversation the quest concludes and one may receive a legendary weapon recipe, a legendary junk item, and a rare weapon. 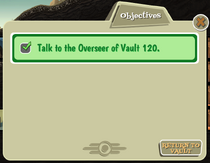 Layout
Add a photo to this gallery
Retrieved from "https://fallout.fandom.com/wiki/The_(Thinly_Veiled)_Plot_Thickens?oldid=3485814"
Community content is available under CC-BY-SA unless otherwise noted.