That Gun is a unique 5.56mm pistol in Fallout: New Vegas.

This section is transcluded from .223 pistol. To change it, please edit the transcluded page.

The original .223 pistol that became one of the iconic weapons of New California, was originally a full sized .223 revolving rifle, belonging to Irwin, a farmer outside of The Hub. He cut his rifle down to the size of a large pistol, but leaving the vestigial double trigger intact.[1] This unique weapon offered firepower comparable to a hunting rifle in the compact package of a pistol.[2]

This iconic sidearm caught the eye of gunsmiths the following years, and the pistol was reproduced multiple times, while it was also modified to fully accommodate the more powerful 5.56mm.[3][Non-game 1] The vestigial double trigger was removed to improve performance, while the internal mechanisms were retained from the original .223 revolving rifle.[4]

That Gun is a heavily modified, pared down .223 pistol, successor to the same weapon from Fallout and Fallout 2. It weighs a hefty 5 pounds and has a motorized cylinder and crane for quicker shooting and reloading than a typical revolver. When reloading, the cylinder mechanically swings open to the left and auto-ejects the spent casings for a more efficient reload time for the end user. The green light on the left side turns yellow while reloading then turns green and makes a ringing noise once the weapon has reloaded. During reload, the door to the cylinder quick opens to allow the cylinder to swing out, and then quickly closes once the outside of the frame and repeats the process in reverse to load. Until the release of the add-on Gun Runners' Arsenal, That Gun was the only pistol capable of using dedicated armor piercing rounds. That Gun is also the least expensive named rare gun that is available for purchase in Fallout: New Vegas.

That Gun can fire about 1120 standard rounds, the equivalent of 224 reloads, from full condition before breaking.

The weapon is located in Novac, inside the Dino Bite gift shop. It can either be purchased from Cliff Briscoe or stolen from the storage room. It is on the end of the first shelf with the rocket souvenirs to the right. The storage room key can be pick-pocketed or the Very Easy lock can be picked. The key may also be purchased during the quest Come Fly With Me or any time after its completion. 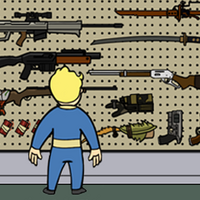 That Gun in the achievement image for Curios and Relics