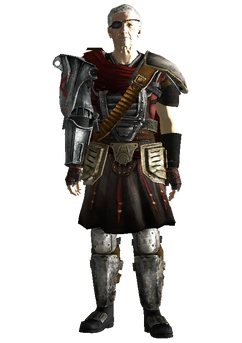 Testacles the Debug Centurion is a cut non-player character that is still present in the game's files of Fallout: New Vegas. He can be spawned using the console command player.placeleveledactoratme 139B8B.

Upon being spoken to he can: alter the Courier's Reputation with various factions of the Mojave Wasteland, spawn Rex, edit quest outcomes and many other aspects of the game.

Testacles the Debug Centurion was a debug tool to test Fallout: New Vegas' functions in its development stages.

Retrieved from "https://fallout.fandom.com/wiki/Testacles_the_Debug_Centurion?oldid=3322329"
Community content is available under CC-BY-SA unless otherwise noted.