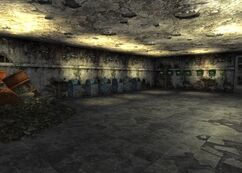 TestQAItems features various containers which hold a copy of all the items found in the game, as well as those which were cut or are otherwise inaccessible for the player. It consists of two rooms: the initial room that contains all the aforementioned items, and a second room with containers that look like the mailboxes seen throughout the Capital Wasteland. Their lock levels vary from Very Easy to Very Hard but don't contain anything upon unlock, these containers were most likely for testing lockpicking. There are also 5 similarly set-up computer terminals in the same room, presumably there to test hacking. The only inhabitant is a person sleeping on a mattress, who is nicknamed the "sleeping guy".

Be careful when picking up weapons or notes, as some are broken and will freeze the menu on your Pip-Boy for that category. In general, avoid objects that don't have a picture in the bottom left.

TestQAItems appears in the game files of Fallout 3 but should not be considered canon due to it being a test cell. Although there is no room like this in Fallout: New Vegas, by using the "player.placeatme" console command the player can spawn similar mailboxes with all the Fallout: New Vegas content.

Retrieved from "https://fallout.fandom.com/wiki/TestQAItems?oldid=2396963"
Community content is available under CC-BY-SA unless otherwise noted.