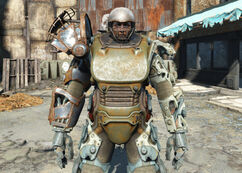 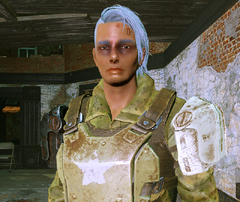 Tessa without her mask and power armor

Tessa is a member of the Gunners in the Commonwealth in 2287.

Tessa is found in the Quincy police station, in the Gunners base of Quincy ruins. She wears low-end power armor, preferring melee attacks, carrying the unique piece of power armor Tessa's Fist.

A former raider, Tessa does not trust Clint, the overall leader of the Quincy Gunners, and has unrequited feelings for Baker, the other commander. She reveals as much on the Quincy Police Dept. computer terminal and on a holotape she sends to Baker, citing Clint's former involvement with the Minutemen as reason to believe he will eventually betray them. She is also unhappy that Clint's detachment let Preston Garvey and a small group of civilians escape Jamaica Plain after the Quincy Massacre. In response Baker warns her not to run her mouth off or else the new leadership will make an example of her. In turn, Clint's own logs reveals he finds Tessa unruly and insubordinate, and uses power armor recovery and scouting missions as a way to keep her busy.

Tessa appears only in Fallout 4.

Retrieved from "https://fallout.fandom.com/wiki/Tessa?oldid=3123035"
Community content is available under CC-BY-SA unless otherwise noted.