The Tesla cannon is a cut content weapon in Fallout 3.

This section is transcluded from Tesla cannon. To change it, please edit the transcluded page.

The Tesla cannon is a pre-War designed shoulder-mounted heavy directed energy weapon, designed to replace conventional anti-tank weapons.[1] Based on Nikola Tesla's designs, the weapon entered limited production before the war and remains a rare sight in the wasteland. However, it remains a powerful tool in the hands of a skilled user, as the focused energy blast will not only deliver massive damage to the target, but the nature of the blast will also deliver a potent electric shock.

Near the end of the war between the Brotherhood and the Enclave in the Capital Wasteland, the Brotherhood's scribes under the Order of the Sword worked to build their own Tesla cannons to more effectively counter the Enclave's Vertibird fleet. To do so, the Lone Wanderer was tasked with retrieving a PPE Tesla coil from Olney Powerworks, an experimental piece of pre-War technology.[2][3]

The modified Tesla cannon employed by Lyons' Brotherhood of Steel is far more powerful than the pre-War Tesla cannon. Discharging a large electrical impulse upon impact with a much larger area of effect. This explosive damage makes the Lyon's model far more suitable for anti-Vertibird use.[4]

This Tesla cannon is a developer test weapon, presumably an early developmental version of the Tesla cannon. It is aesthetically identical to a missile launcher and uses missiles as its ammunition source. It can be obtained via a glitch or console commands.

As already mentioned the weapon is both identical to and uses the same ammunition as ordinary missile launchers, but still fires the same blast of electricity as the normal Tesla cannon. This Tesla cannon (it is just called "Tesla cannon" in the game) delivers less damage than the actual cannon and uses up more A.P. per shot, but it can actually be repaired by ordinary missile launchers (but not vice versa). This means that unlike the regular Tesla cannon, the test version can be repaired to 100% indefinitely (assuming one's Repair skill is high enough).

The Tesla cannon (Beta) can fire a total of about 83 times from full condition before breaking.

One copy of this weapon can be found outside the map boundaries at satellite relay station. It is obtainable via some rather tricky jumping, building an ammunition staircase, using Dogmeat, or console commands.

Location of the weapon

Obtaining the Tesla cannon (Beta) on Xbox 360 and PS3 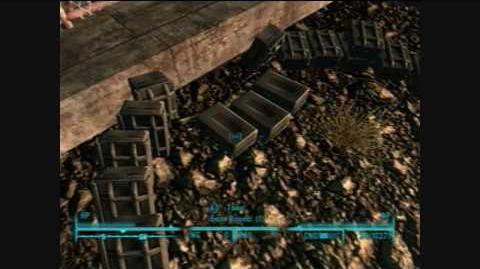