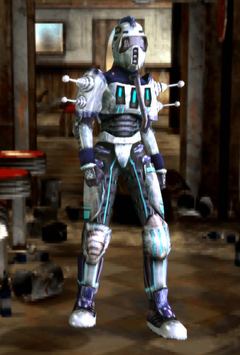 “Tesla armor is a modified suit of metal armor. It offers the same protection from melee and ranged attacks, but the Tesla coils and other science-genius gear offers almost complete invulnerability to energy weapon attacks.”

The Tesla armor developed in the Secret Vault is different from the Tesla armors used by the Brotherhood of Steel or American military forces before the War.

It appears to be a bit similar to Vault-Tec's power armor. There are two Tesla coils on the shoulders that disperse a large percentage of directed energy attacks.

The principle of the Tesla coils was also used by the Enclave to create the Tesla power armor.

It can be found or purchased in the Secret Vault.

Add a photo to this gallery
Retrieved from "https://fallout.fandom.com/wiki/Tesla_armor_(Fallout:_Brotherhood_of_Steel)?oldid=3494430"
Community content is available under CC-BY-SA unless otherwise noted.