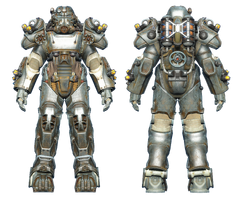 Tesla T-60 armor is a set of unique armor parts in the Fallout 4 add-on Automatron.

Although collectively called Tesla armor, the set consists only of arms and torso pieces. All three provide a slight bonus to damage dealt with energy weapons of 5% per item, or 15% if all three are equipped. Tesla T-60 armor pieces always display the "Tesla" identifier in their name regardless of upgrades or mods.

All three parts can be acquired during the quest Headhunting by killing Ivey in the Fort Hagen hangar.

Ivey in the Fort Hagen hangar