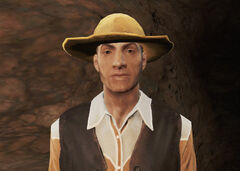 Terry Tanaka is a deceased character in Nuka-World in 2287.

Terry is one of the original settlers of Nuka-World, settling down alongside numerous others in Dry Rock Gulch. When the raiders began their take over of the pre-War theme park, Terry and the others decided to fortify themselves in Mad Mulligan's Mine to fight off the raiders. However, the area was infested with bloodworms, and the settlers were killed.

Terry Tanaka appears only in the Fallout 4 add-on Nuka-World.