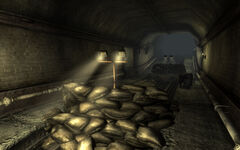 Watch out for frag mines and Rocksalt!

“You could test it out on just a few mole ratties, but for real testing, try it on ten or more. There should be plenty in the Tepid Sewers, downtown.”— Moira Brown

The tepid sewers are an underground network between the Anchorage Memorial (close to Dukov's Place), and Georgetown. The sewers are inhabited by several mole rats and raiders.

The sewers consists of various long, interconnecting tunnels which lead into a larger train tunnel. There are several maintenance rooms which hold junk items in them, and some tunnels end in rubble. The main tunnel is guarded by a turret which can be deactivated by a terminal near the entrance. There is a gas leak in the main tunnel that can be set off by certain weapons. Throughout the tunnels, raiders may be fighting off mole rats.

The tunnels lead into a generator room, which allows access into a large train tunnel. This particular tunnel is covered in land mines and several raiders, including their current leader Rocksalt, who will be standing guard near the end of the minefield (C). There is a small room leading into a living quarter where the raiders sleep. Continuing through the tunnels leads back into sewers where more mole rats live.

The Wasteland Survival Guide: It is suggested to visit this location during Moira Brown's quest, to test Moira's repellent stick, which is smeared with mole rat repellent.

The tepid sewers appear only in Fallout 3.