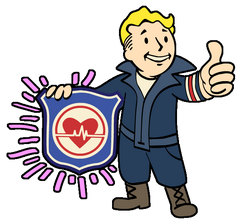 “The Responders Database at Morgantown Airport is still active if you are an Official Responders Volunteer. Like me! I was able to find a training program that seems to be active -- I should listen to the Volunteer Training: Camping 101 holotape to see if it's useful.”

Tentative Plans is a side quest in Fallout 76.

Upon playing the holotape, the player character must investigate Responder Miguel Caldera's old C.A.M.P. for any useful supplies or information. The C.A.M.P. is located on the hill to the northwest of the airport and consists of a broken tent, a sleeping bag, and an explosives crate. Miguel's corpse can be found next to the crate, but his protectron, Mr. Fluffy, is still active. A note can be found inside the tent, detailing the basics of setting up a camp.

Talking to Mr. Fluffy will result in him telling the player character that Miguel kept both C.A.M.P. schematics and a "Reset Program" holotape in his workshop at the airport. The player character must retrieve these from his workshop, which is one of the buildings down the hill on the airstrip. The holotape is sitting at a desk inside, while the schematics must be downloaded from Miguel's terminal. Going back to the C.A.M.P. and giving the holotape to Mr. Fluffy will "reset" his personality into a more helpful one. He will then ask the player character to build a camp nearby with a cooking station and stash box or a generator in it. Doing so will complete the quest.

Retrieved from "https://fallout.fandom.com/wiki/Tentative_Plans?oldid=3367988"
Community content is available under CC-BY-SA unless otherwise noted.