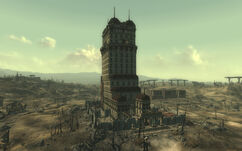 “Come on Al, cut the ghoulies a break. If they've got the caps and you've got the space, it's a win-win, right? So what do you say?”— Three Dog

Tenpenny Tower is a side quest connected with Tenpenny Tower that is given by either Gustavo or Roy Phillips, and is an achievement/trophy in Fallout 3.

The ghouls want to live in the luxurious Tenpenny Tower, but neither Allistair Tenpenny nor the other residents are willing to let them in. The player character can choose to kill the band of ghouls, let them into the tower, or find an uneasy diplomatic solution. Note that the decisions made in this quest can have permanent and major effects on the fate of a major city and obtaining some of the most useful items in the game.

The quest is started either by speaking with Chief Gustavo at Tenpenny Tower or by Roy Phillips in the Warrington Tunnels.

If the quest is initiated by speaking to Chief Gustavo, the Wanderer will get an assault rifle and a promise of 500 caps for the death of Roy Phillips and his "gang." A successful speech check will raise the reward to 700 Caps, as well as upgrade the player character's starting gun to a Chinese assault rifle with some 5.56mm rounds. Attempting and failing the speech test means one will get a 10mm SMG instead.

Gustavo will direct the Wanderer to the feral ghoul infested Warrington Tunnels southwest of Tenpenny Tower. Follow the tunnels and one will find a door leading to Roy Phillips' hideout. Once Roy and his gang has been located, either kill the ghouls, or speak to Roy and offer to help him and his ghouls enter the building through the secret underground entrance to massacre the residents, or find a peaceful way for the ghouls and humans to live together. One way the ghouls will take over and occupy the area, and the other way the ghouls will be dead and the humans will continue living where they were before.

This quest will also be automatically added if one kills every resident of Tenpenny Tower. The quest will jump straight to the stage where the Wanderer can "Tell Roy Phillips the ghouls can move in."

After killing Roy and his gang, return to Chief Gustavo and he will reward the player with 500 or 700 caps, depending on whether they passed the speech check. The ghoul mask cannot be obtained if this method was chosen.

Killing Roy Phillips has the upside of sparing the lives of all the residents of the tower, as all the other solutions eventually result in the death of every human in the area (killed either by the Wanderer or by Roy Phillips and his pack of feral ghouls). Killing Roy will result in having multiple traders in the tower compared to just two if he were allowed in.

Ways to kill Roy Phillips and his gang

Enter Roy's hideout and kill Roy Phillips and his ghouls while they are in the hideout.

One can also choose to kill Roy during the conversation he has with the intercom when first approaching Tenpenny Tower. Simply allow the conversation to finish and then attack him when he leaves, or reverse pickpocket a mine or grenade into his inventory while he isn't looking. The player will still have to talk to Gustavo to initiate the quest and kill the rest of his gang.

If one wants to kill the ghouls without losing Karma, they can allow the feral ghouls to follow them into the room containing Roy Phillips and Bessie Lynn. Roy, Bessie, and Michael Masters will attack even if the Lone Wander has not harmed the ferals. If one then kills them, their Karma will not suffer, but Three Dog will still verbally berate the player afterward.

Roy, Bessie or Michael can be provoked into attacking via dialogue choices, and then they can be killed without losing Karma.

Roy Phillips and his gang can be killed without losing Karma if the Wanderer has the Mister Sandman perk. To do this, first wait for the three ghouls to go to sleep. Murder Bessie first, she will scream but this will not wake Roy or Michael. Either Roy or Michael can be killed next (preferably Roy because he is closer to Bessie). Afterwards, the third ghoul will wake up and turn hostile, so the player will then be able to pick him off without incurring loss of Karma.

Talk to Roy about the possibility of a peaceful negotiation, then bring the proposal to Allistair Tenpenny. He will tell the player that if they can convince tenants Edgar Wellington II, Millicent Wellington, Anthony Ling, Lydia Montenegro and Susan Lancaster to have the ghouls as neighbors, he'll let them move in. One can also get rid of them by murder to accomplish this task.

There are several methods of getting the five residents to cooperate. The first is passing a speech check (for positive Karma), which forces them to accept the change or leave. Stealthy assassinations (for negative Karma, Mister Sandman perk can be useful here) also work. Alternatively, take the love letter from Susan Lancaster's desk and show it to Millicent Wellington, she will then proceed to murder both her husband Edgar and his lover Susan. Millicent will then leave the tower, leaving only Anthony and Lydia. These two can be convinced to leave by stealing from their store safes and speaking to them after doing so.

Once all required tenants are convinced or otherwise removed from the picture, visit Mr. Tenpenny for a 500 cap reward. Once Roy Phillips has been brought the news, he will reward the Wanderer with a ghoul mask, which makes them friendly with feral ghouls. Additionally, one will also gain a 300 XP reward.

Upon returning to Tenpenny Tower, human and ghoul residents will be found living together. Inquiring among residents will indicate that both sides are getting along well. A few days later, however, all the human residents will be gone. Further investigation reveals that the human and ghoul tenants had a "disagreement," and that Roy Phillips decided to "take out the trash." The human residents have all been slaughtered, and their looted and stripped bodies dumped in the basement. Former residents of Tenpenny Tower such as Mr. Ling and Ms. Montenegro will also die and disappear at this point, even if they have moved to the entrance of Megaton. One may choose to kill Phillips and the other ghouls in Tenpenny Tower after learning this, but doing so will earn negative Karma.

Ways to open the door in the generator room

If the terminal cannot be hacked, due to not having a high enough science skill, one can choose to shoot the generator to their left. Also, after the ghouls have been let in and the door is open, the door is assumed to be open indefinitely, but the generator can be shot then the door can be closed.

To receive two copies of the dart gun schematics, first buy it from Lydia Montenegro or kill her and use her key to raid the Le Chic Boutique inventory. Then after letting the ghouls take over the tower, buy it from or kill and loot Michael Masters.

Retrieved from "https://fallout.fandom.com/wiki/Tenpenny_Tower_(quest)?oldid=3336517"
Community content is available under CC-BY-SA unless otherwise noted.