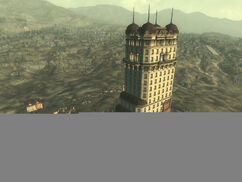 Tenpenny Tower is a private hotel re-arranged from an intact pre-War luxury hotel located southwest of Megaton. It's now the refuge of the reclusive Allistair Tenpenny who allows people in for the "right price." However, he is seemingly biased against ghouls and will not let them in.

Before the Great War, the tower, later know as Tenpenny Tower, was a luxury hotel. After the Great War, the building was still intact. Upon the discovery of the abandoned building, Allistair Tenpenny set to work restoring it to its pre-War glory. This suggests that he had made substantial amounts of money since his arrival from England, but it is unclear how. The building even has radiation-free water in the luxury apartments, one of the few places in the Capital Wasteland to have it.

The structure itself is surrounded by tall concrete walls, which creates a compound of sorts. Around the rear of the building is the entrance to the Generator Room, which is used in the quest Tenpenny Tower. There is also a covered area to the right of the main gate, which serves as the guard's quarters. The building did not completely escape damage from the bombs, and was repaired with scrap metal on the facing that took the damage.

Of important note is that the wall can be jumped over to get inside. This is particularly useful if the player does not want to pay the entrance bribe and has not attached the Fusion Pulse Charge to the bomb in Megaton. To get inside, go to the west side of the wall and look for a relatively large crop of rocks. There will be a portion of the wall missing there, and it will be lying on the ground against the rest of the barrier. Jump on top of the broken piece and then through the gap.

Should the player choose to enter through the wall without ever coming through the actual gate, the gate can be opened from the inside by interacting with the speaker near the guard posted there.

The Penthouse suites level contains the accommodation of Allistair Tenpenny, Irving Cheng, Mr. Burke and Susan Lancaster. There is also a suite that the player can acquired as a reward for completing The Power of the Atom. The players suite shares a balcony with Allistair Tenpenny's accommodations where Mr. Tenpenny can be found hunting with his sniper rifle

It is notable that while it is possible to steal from the safes and cash boxes of the store owners, doing so causes the store owners to complain about security and leave, meaning you cannot shop from them. However, you can subsequently follow them outside Tenpenny Tower and then kill them for their inventory keys without making the other residents hostile.

Tenpenny Tower appears only in Fallout 3.

FO3 Tenpenny Tower.jpg
Tenpennyfromoverlook.jpg
Tenpenny Tower, as seen from a distance
Add an image to this gallery
Retrieved from "https://fallout.fandom.com/wiki/Tenpenny_Tower?oldid=1276780"
Community content is available under CC-BY-SA unless otherwise noted.