Fallout 3
“Tenpenny Tower is the brainchild of Allistair Tenpenny, a British refugee who came to the Capital Wasteland seeking his fortune.”— Loading screen

Tenpenny Tower is a fortified settlement in the Capital Wasteland in 2277. It is located out in the wastes west of the DC ruins, directly southwest of the RobCo main production facility.

Before the Great War in 2077, the tower was a resort. The ghoul Michael Masters, who was once an eminent scientist 200 years prior, vacationed at the tower and noted that it was "a resort for the wealthy and powerful." Michael Masters also claims that the hotel was built on the foundations of a plantation.[1]

By 2277, Tenpenny Tower had become a private and elitist residential and commercial building owned by Allistair Tenpenny, an entrepreneur from England who only permits the well-to-do or wealthy to reside there.[2] Tenpenny tells the Lone Wanderer that as soon as he saw the tower on the horizon, he knew it would suit his purposes. He describes hiring individuals who fixed the building up quickly and began to provide its security. Those under his employ include Chief Gustavo and right-hand man Mister Burke.[3] The water in the tower was not irradiated[citation needed] and the group was able to begin siphoning electricity from the still-working underground DC Metro system.[4]

Soon, word had spread among the wastes and many flocked to this new settlement, but Tenpenny would only let in traders or those with enough caps, and certainly no ghouls. Soon shops, a bar, and a clinic were set up in and around the lobby. The penthouse suites were given to those of Tenpenny's choosing, where they could watch him take pot-shots with his sniper rifle as part of his "wasteland safari." Gustavo took over security detail for the tower and concerned himself with the "ghoul problem," while Mr. Burke set out to find a way to end the "eyesore" on the horizon which distressed Tenpenny. A Protectron, Shakes, was programmed to be the tower's barman.

The structure itself is surrounded by tall concrete walls, which create a compound of sorts. Around the rear of the building is the entrance to the generator room, which is used in the quest Tenpenny Tower. There is also a covered area to the right of the main gate which serves as the guards' quarters. The building did not completely escape damage from the bombs and was repaired with sheets of metal in the areas of the hotel that took the most damage.

The wall can be jumped over to get inside, which is particularly useful to avoid paying the entrance bribe, or if the fusion pulse charge has not been attached to the bomb in Megaton during the quest The Power of the Atom. To get inside, go to the west side of the wall and look for a relatively large outcrop of rocks. There is a portion of the wall that has fallen over and is lying on the ground against the rest of the barrier. Jump on top of the broken piece and then through the gap.

Should one choose to enter through the wall without ever coming through the actual gate, the gate can be opened from the inside by interacting with the speaker near the guard posted there. If not, it is required to pay to come inside again when speaking to the gatekeeper through the intercom.

Entering the building, the Lone Wanderer will find themselves in the lobby, which contains stairs to the third-floor apartments, an elevator to the penthouse, and is home to a variety of businesses, including:

The Lone Wanderer's suite shares a balcony with Allistair Tenpenny's, who can sometimes be found there, hunting with his sniper rifle.

Tenpenny Tower appears only in Fallout 3 but a picture of it and a man standing in front of it can be found in the Tops casino in Fallout: New Vegas. This picture also appears in a room on the top floor of the REPCONN test site. 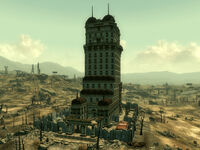 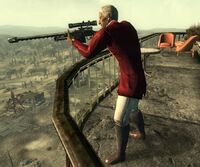 Love letter and Tales of a Junktown Jerky Vendor

Duck and Cover! in the ruined house slightly to the west

Tenpenny Tower seen on a painting 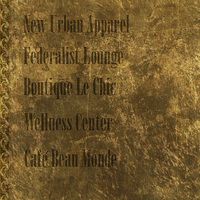 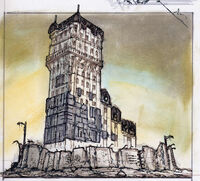 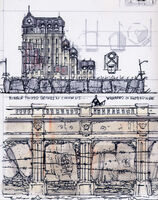