Tend to Your Business 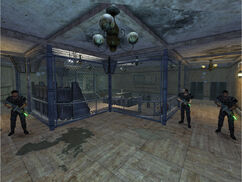 “I want you to visit these weapons dealers, this Van Graff family, and make an example of them. Leave no one alive.”— Head Paladin Hardin

Tend To Your Business is a side quest in Fallout: New Vegas.

After Elder McNamara is ousted and Head Paladin Hardin becomes the new elder, you are given the opportunity to join the Brotherhood of Steel through a heroic act. Hardin already has a task in mind: to wipe out the Van Graffs as a show of loyalty to the Brotherhood.

Due to well-equipped guards, and a mandatory pat-down upon entering the Silver Rush (the Van Graff base of operations) killing all of the Van Graffs can be a difficult task. However, there are multiple ways to kill them.

The quest name is a reference to a hit song recorded by blues musician James Wayne in 1951.

Retrieved from "https://fallout.fandom.com/wiki/Tend_to_Your_Business?oldid=3371408"
Community content is available under CC-BY-SA unless otherwise noted.