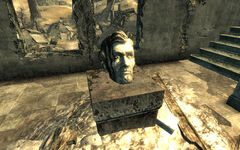 The head of Abraham Lincoln at the Temple of the Union

“This place is the death of all slavers. Maybe someday the death of slavery. Hannibal has a plan. We're too small right now, but someday we'll be big enough to take them on.”— Simone Cameron

The Temple of the Union is a location in the Capital Wasteland in 2277, located northwest of Canterbury Commons and south of the grisly diner.

The Temple of the Union is a small compound of escaped slaves who wish to create a haven to protect and inspire all runaway slaves.

The temple's leader, Hannibal Hamlin, dreams of a safe haven for would-be slaves away from slavers. Their respect of Abraham Lincoln is almost reverent and they wish to set up their temple in the Lincoln Memorial - not only because it would be easier to defend, but he is also known to the slaves as the man who ended slavery in America. Because of this, Hannibal Hamlin will offer to buy any of Lincoln's artifacts.

There are several ways to get its marker on the map. The marker may be given to the Lone Wanderer by helping out Mei Wong in Rivet City or by successfully removing a collar from a slave in a random encounter. A map may be found on several corpses of dead slaves, presumably failed runaways.

It is a ruined three-story building that houses a group of escaped slaves. Initially, Abraham Lincoln's head is here although it is unclear how it came to be here. Completing the quest Head of State will result in the head being moved to the Lincoln Memorial.

The raider fort is unoccupied until Head of State is completed. An Enclave vertibird may also land there as the Lone Wanderer passes under it. The following loot spawns in the raider fort on the collapsed highway to the southwest of the Temple after finishing Head of State and The Waters of Life:

The Temple of the Union appears only in Fallout 3.