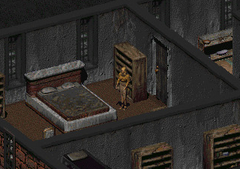 Ethyl Wright, co-founder and main person in the Temperance Union.

“New Reno is a beautiful city, but there is SIN here - much of which can be traced back to the evils of alcohol... or as you tribesmen call it...(Pauses dramatically.) ...FIREWATER!”— Ethyl Wright

The Temperance Union is a faction in New Reno in 2241.

The New Reno Temperance Union is a group dedicated to the eschewing and abolition of intoxicating beverages. They justify their arguments by stating that alcoholism or even the occasional partaking of alcohol leads to moral failure and wickedness. However, as alcohol in its various merry aspects forms one of the pillars of New Reno vice – and therefore profit – the Union has not achieved a great deal of success.

According to Ethyl Wright, the Union was co-founded by herself and the local priest, Father Tully. Ethyl then convinced her husband, Orville Wright (New Reno's primary supplier of liquor), to cease production of alcohol and dismantle the stills. Orville complied with his wife's wishes... to an extent.

Since its founding, the Union failed to gain any traction. Most likely, the Union's failure can be attributed to the extreme profitability of alcohol in the wasteland, and the simple fact that many of the people who visit New Reno – or at least those who do so willingly – have drinking as one of their main goals. By and large, the townspeople of New Reno have never heard of the Temperance Union, and would probably find the concept laughable if they did.

Another critical problem with the Union is its membership, or, more accurately, its lack of membership. By the mid 2240s, the Union had exactly two members: Ethyl Wright and Father Tully. This, too, was just as ironic as founding a Temperance Union in New Reno, as Father Tully was, and remained, an inveterate drunkard. Ethyl, however, would refuse to believe that Tully spent most of his time in a bottle, and would call such accusations slander, even when the good father was usually to be found sprawled on the floor. Given Wright's fleeting moments of lucidity – and Tully's fleeting moments of sobriety – it is altogether likely that the Temperance Union really only exists within the borders of Ethyl's head. This notion is reinforced by Orville's dismissal of any talk of the Union.

Finally, and perhaps worst of all, Orville Wright's promise to dismantle the family stills was as hollow a promise as can be made. The stills were indeed dismantled, only to be rebuilt below a nearby train station. The bulk of the Wright family's income still comes from the widespread export and sale of alcohol of all stripes.

Working for the Union

Still, despite the Union's almost imperceptible size and influence, Ethyl Wright remains on the lookout. Should someone bring to her attention her husband's deception, she is both heartbroken... and vengeful. One bad turn deserves another in the world of Ethyl, and she has no restrictions against asking someone to destroy her family's livelihood if it means taking a drink out of someone's hand.

The Temperance Union appears only in Fallout 2.