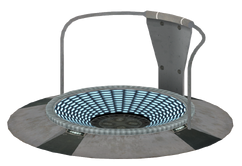 Although each teleportation matrix can only be used for traveling to one other matrix, it appears that multiple matrices may connect to the same target and that the connection is not necessarily a two-way one. As an example, the matrix on the bridge can be reached from a matrix in the living quarters but it cannot be used to travel back. The same matrix on the Bridge can also be reached from another one in the engineering core.

Play sound
Wpn teleporter lp.ogg
Add an image to this gallery
Retrieved from "https://fallout.fandom.com/wiki/Teleportation_matrix?oldid=3350966"
Community content is available under CC-BY-SA unless otherwise noted.