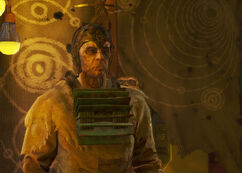 “Locked inside us all are billions of invisible worlds, waiting only to be touched by His Glow in order to be born anew through Division.”

High Confessor Tektus is the leader of the Children of Atom living in the Nucleus on the Island in 2287.

High Confessor Tektus has been a Child of Atom for over a decade, since the days of Confessor Cromwell. He eventually left Megaton with Confessor Martin to settle in Maine and eventually rose to the rank of zealot. He was the one who helped save Grand Zealot Richter when he was trapped. After Martin left, Tektus became the high confessor and he began to take a far more aggressive stance against the harbormen.

He believes that the Island is Atom's holy land, and all its inhabitants must worship his glory. Though he is willing to maintain peaceful relations with the Acadians because they supplied the Children with the Nucleus, he is vehement in his hatred of the residents of Far Harbor, frequently deriding them as heathens and sometimes even sending some of his followers to sabotage their defenses.

Tektus on his throne in the Vessel

Tektus preaching from the top of the Vessel
Add a photo to this gallery
Retrieved from "https://fallout.fandom.com/wiki/Tektus?oldid=3457072"
Community content is available under CC-BY-SA unless otherwise noted.