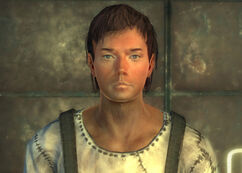 “Ted Strayer. You can chill with me if you want, dude.”

Ted Strayer is a Rivet City resident in the year 2277.

Ted was born in 2258. He is a 19-year-old who has spent most of his life wandering the wasteland. He is new to Rivet City and is staying in the common room until he figures out where he's going next. Ted rarely plans beyond the moment. It is easy to pique his interest, but difficult to hold it.

He can be found in the Capitol Preservation Society in the afternoon. Furthermore, he regularly frequents The Muddy Rudder bar and the common room between 4 and 6 AM, along with wandering around the flight deck from noon to 2 PM.

You Gotta Shoot 'Em in the Head: Ted is one of Crowley's targets and has Ted Strayer's special key.

If the suicidal Mister Lopez is convinced not to kill himself, Lopez will teach Ted how to read.

Ted Strayer appears only in Fallout 3.

Retrieved from "https://fallout.fandom.com/wiki/Ted_Strayer?oldid=2409496"
Community content is available under CC-BY-SA unless otherwise noted.