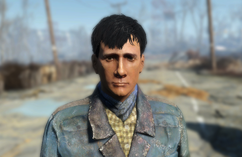 Ted Huntley is a human living in the Commonwealth in 2287.

Ted Huntley is a resident of Covenant. He maintains the defenses of the settlement and also delivers messages to and from the Compound. According to Jacob Orden, Ted Huntley moved to Covenant after his family was brutally murdered by synths.

Ted Huntley appears only in Fallout 4.

Retrieved from "https://fallout.fandom.com/wiki/Ted_Huntley?oldid=3417971"
Community content is available under CC-BY-SA unless otherwise noted.