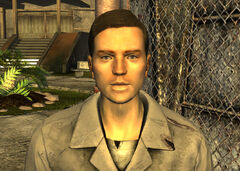 Ted without his hat

“Who gives a rat's patoot if they're sorry? Sorry's what they'll be when they're strung up and lynched by my daddy's posse. These White Knuckles got hell to pay, I'll see to that when I get outta here.”

Ted Gunderson is a character found in the Ultra-Luxe casino in 2281.

Ill-mannered and entitled, he is the son of notorious brahmin baron Heck Gunderson. While accompanying his father to the Ultra-Luxe, Ted Gunderson was mistakenly kidnapped by the faction of the White Glove Society loyal to Mortimer, who intended to serve him at a special dinner designed to convert the society to cannibalism. He can be found in the Ultra-Luxe kitchens.

When Ted's identity is discovered, however, Mortimer voices his new unwillingness to serve Ted, and requests the Courier to find a new "main course" to continue on with their plan. Mortimer also gives the Courier the option of killing Ted and framing his father for the murder.